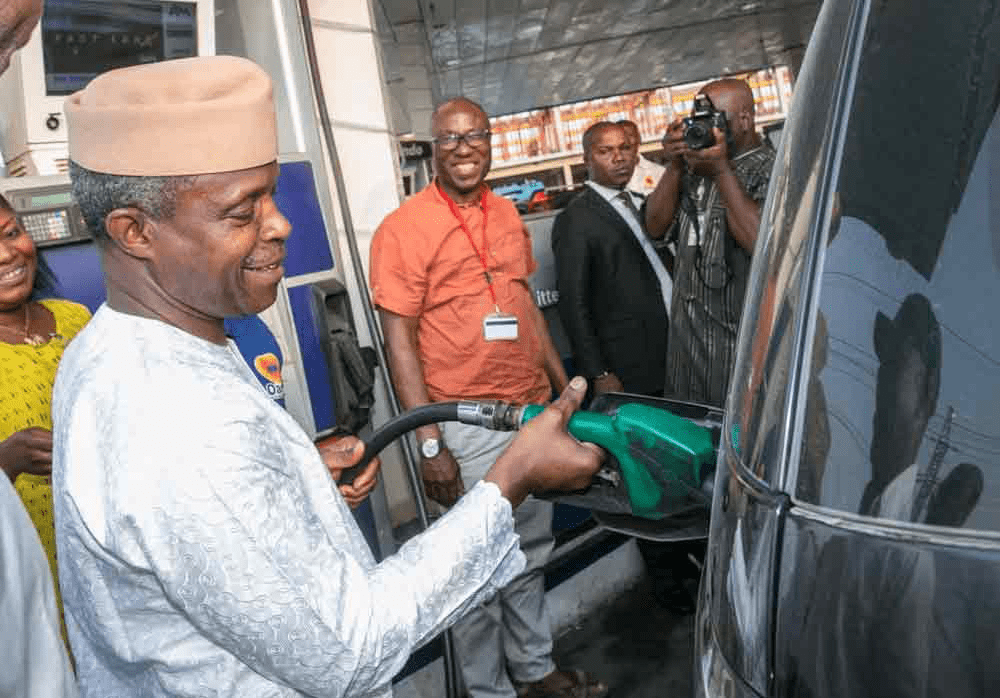 Nigeria's Vice President Yemi Osinbajo dispensing fuel into a car at a filling station in Lagos in December 2017. PHOTO CREDITS: THE PUNCH

AN IMAGE showing Nigeria’s Vice President Yemi Osinbajo with a pump nozzle, dispensing fuel into a car at a filling station has resurfaced online with a claim that the photo was shot when the VP visited a filling station recently as the nation prepares for the 2023 general election.

Osinbajo had on Monday, 11th of April 2022, declared his intention to contest in the country’s next presidential election. The declaration had elicited mixed reactions from Nigerians.

A Twitter user named JOE with the handle @gani_jonathan tweeted the photo with a caption: “Election don near Osinbajo don turn fuel attendant.”

Another Twitter user named King Cally with the handle @Caleb_Abah1 also tweeted the same photo with the caption: “2023 Ambition: Osinbajo is now a fuel pump attendant. Isn’t this format stale?”

The same image was also posted by several Facebook accounts with claims suggesting that it was shot recently.

One of them was Promise Mathew Emeka who also posted the image on Facebook alongside the caption: “Ahead of 2023 elections, Prof. Yemi Osinbajo, the vice-president of this country turns to fuel pump attendant.”

That the image shows Osinbajo dispensing fuel at a filling station ahead of the 2023 election.

A Google Reverse Image Search on the image shows that the photo first appeared on the internet on the 25th of December, 2017.

The image alongside several others was shot when Vice President Osinbajo visited two filling stations in Lagos on the 24th of December, 2017 amid fuel scarcity in the country at the time, The Punch newspaper reported.

Using the Image Analysis tool on InVID verification toolbox, findings by The FactCheckHub show that JOE’s tweet was retweeted more than 2,000 times with over 6,000 Likes and over 700 replies on Twitter as of 2 p.m. on Thursday, 14th of April, 2022.

In a statement released via his official Twitter handle @profosinbajo on the 25th of December, 2017, Osinbajo said that he visited the filling stations to witness first-hand, the sufferings of Nigerians who were subjected to endless queues due to the fuel scarcity.

“This is something that President Buhari is deeply concerned about, mandating all relevant persons to bring an end to the fuel queues. I witnessed first-hand the discomfort that many of us have to contend with.

“We sympathise with you and are working assiduously to eliminate this pain in the shortest possible time.  We regret this inconvenience while assuring that all hands are on deck to return things to normalcy,” the tweets thread read in part.

Other news websites and online blogs also published the same image on the 25th of December, 2017 as seen here, here, here and here.

The viral image of Osinbajo dispensing fuel at a filling station is not recent, thus MISLEADING; the image is an old photo that has been online since December 2017. 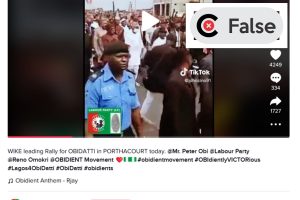