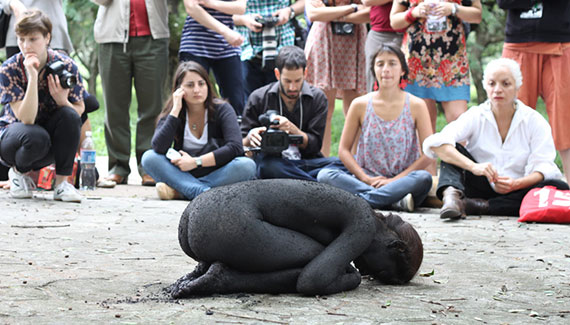 A VIDEO of a naked woman covered with black coal, curled with her face on the ground and showing three persons taking turns to urinate on her, has been shared multiple times on social media with the claim that they are French citizens humiliating a Malian woman.

In the 140 seconds footage, the woman covered with black coal was seen curled with her face on the ground. A few minutes later, two men came out from the onlooking crowd, one after the other, unzipped their pants and urinated on her body. Thereafter, another woman came out and planted her legs on either side of the woman’s body, squatted and also urinated on her back. The audience was seen filming the scene with their cameras.

Some social media users claimed (as archived here and here) that the video shows some French citizens humiliating a Malian woman. Whereas others claimed it shows how Malian women suffered abuse and humiliation when they were being colonized by France.

Media reports show that the military junta in Mali overthrew the Malian government in August 2020 after forcing its elected leader, Ibrahim Boubacar Keita to resign.

As a result, the diplomatic war between Mali and France, its former colonial master worsened in January 2022 when the Malian military government reneged on an agreement to hold elections by the end of January as demanded by the West African regional bloc, ECOWAS, and other international partners, according to the reports.

A Twitter user, @RisenSun6  tweeted the video on Sunday, February 6, 2022 with a caption: “A group of French citizens caught on camera urinating on Malian Citizen after a new military Regime end the relationship between Malian and France government Amid the atrocities Being committing against Malians in Mali by the government of France!.” The video has had over 22,000 views and more than 300 retweets as of February 22, 2022.

Similarly, another Twitter user, @brightersonic had earlier tweeted the video with the caption: “This is the sort of humiliation the French citizens meted out on a female Malian citizen in public. @FRANCE24 @WestCameroons @Africa_Archives @AfricanArchives Africans, They See You The Same Way Their Ancestors Do (as a slave). #Mali #BiafraFreedom.”

Checks by The FactCheckHub show that the footage is an art performance by Regina José Galindo and not of French citizens humiliating a Malian woman in public.

Regina José Galindo is a Guatemalan performance artist who specializes in body art.

The performance titled Piedra, a Spanish word that means stone, was used to show the tragic stories of poor indigenous women in Central and Latin America in the hands of heinous men and women in society.

It was also illustrated that it shows that women and Piedra (Stone) share the ability to endure the abuses of their environment and still survive.

The footage was also found here on Vimeo, posted on December 6, 2016.

The video neither has anything to do with French citizens nor a Malian woman being humiliated in public. It was an art performance by Regina José Galindo. Thus, the claim is FALSE.