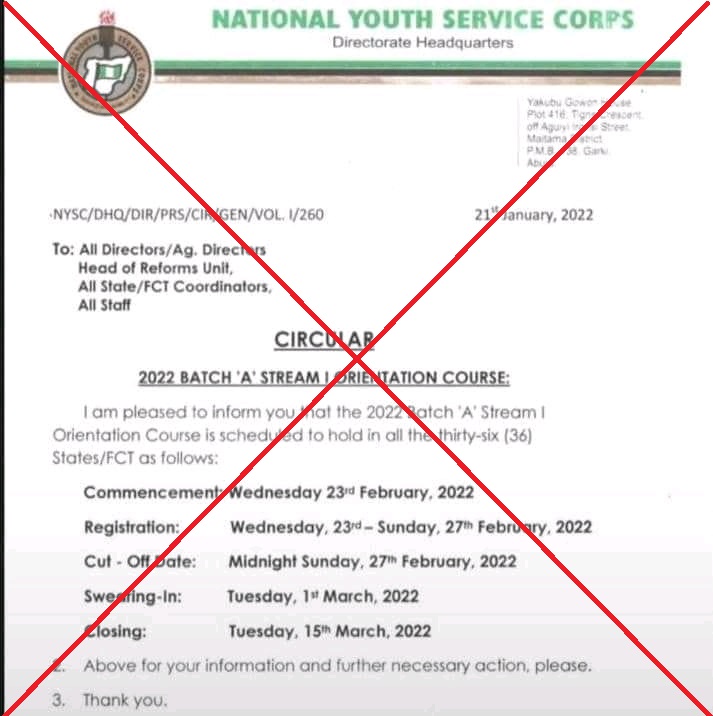 The circular in circulation.

A circular alleged to be from the National Youth Service Corps (NYSC) has been shared multiple times online, claiming it is the timetable for mobilising graduates for the 2022 Batch A orientation course.

The NYSC is a compulsory one-year programme set up by the Nigerian government to involve graduates in nation-building and development. New graduates are mobilised in batches and posted to different states for their primary assignment. The programme starts with a few weeks of orientation course in designated camps spread across the nation.

The viral circular titled ‘2022 Batch A stream 1 orientation course’ contains dates for the commencement of registration, swearing-in and closing of camp for the said Batch.

The circular was circulated on several Facebook pages and WhatsApp groups as archived here and here.

The circular shows the 2022 schedule for mobilising Batch A stream I of the National Youth Service Corps.

Checks by the FactCheckHub show that the memorandum is fake as it did not emanate from the NYSC.

The circular was not found on any of the NYSC social media handles that they employ in information dissemination.

“This is not from NYSC. Disregard it,” the agency replied to an enquiry concerning the memo via the comment section of the official Facebook page.

This is not the first time a false circular was circulated online. In November 2021, the NYSC had to debunk a fake memo in circulation that was announcing mobilisation.

The circular in circulation did not emanate from the NYSC. Therefore, it is FALSE.

Viral photo of rice pyramid built with wood not recent 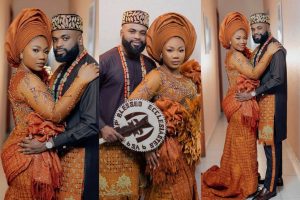