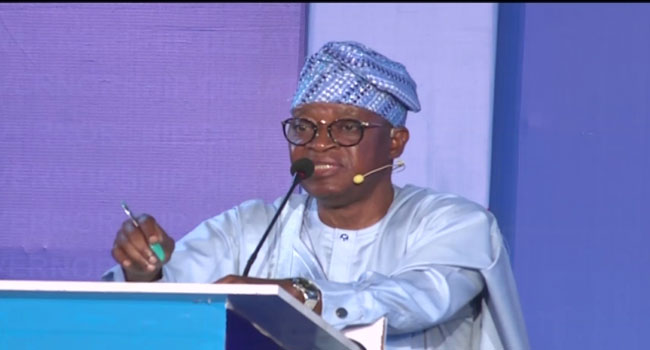 THE incumbent governor of Osun state, Gboyega Oyetola, has claimed that the state has not experienced any serious case of banditry, armed robbery, and kidnapping since he assumed office as the governor in 2018.

Oyetola, who is the flagbearer of the All Progressives Congress (APC) for the July 16 Osun state gubernatorial election, made this claim during a televised debate organised by Channels TV on Monday, 10th of July, 2022.

Others who participated in the debate were Ademola Adeleke of the Peoples Democratic Party (PDP), a former Deputy Speaker of Nigeria’s House of Representatives and candidate of the Labour Party, Yusuf Lasun, and Oyegoke Omigbodun of the Social Democratic Party (SDP) as well as Akin Ogunbiyi of the Accord Party.

“Osun remains the most peaceful state in Nigeria today. We have the joint task force who take care of kidnapping and armed robbery. You would recall that since the inception of this administration we don’t have serious cases of armed robbery, kidnapping, and banditry,” Oyetola said.

That Osun state has not had any serious case of banditry, kidnapping and armed robbery since Gboyega Oyetola became governor of the state.

Checks by The FactCheckHub show that the claim is MOSTLY FALSE.

While it is true that Osun is one of the states in Nigeria with few cases of violent attacks, findings by The FactCheckHub show that several cases of armed attacks have been recorded in the state under the Oyetola-led government.

Preceded by Rauf Aregbesola, Oyetola assumed office as the governor of Osun State on the 27th of November, 2018.

Analysing data from Nigeria Security Tracker (NST), a project of the Council on Foreign Relations’ Africa programme documents and maps violence in Nigeria that is motivated by political, economic, or social grievances,  The FactCheckHub filtered out cases of armed violence recorded in Osun state between November 2018 when Oyetola assumed office up till July 2022 when he made the statement.

The FactCheckHub highlights some instances of kidnapping, armed robbery and other cases of armed attacks recorded in the state during Oyetola’s tenure.

Armed robbers attacked a branch of Wema Bank Plc in Iragbiji, Boripe LGA of Osun state on September 28, 2021. The attack claimed the lives of two policemen who tried to thwart the robbery incident.

The attack came barely two months after robbers attacked two commercial banks in Iree, Osun State. The gunmen killed one person and wreaked havoc on customers and members of staff of the banks.

In a similar development, gunmen attacked a bank in Okuku, a city in Osun state on the 11th of March, 2021. The Punch reported that a commercial motorcyclist and a policeman were shot dead during the incident.

On the 2nd of June 2021, armed robbers attacked two banks and a police station in Ikire and Apomu, Irewole and Isokan local government areas of Osun State. The attacks claimed the lives of seven people, the Premium Times reported.

Armed robbers also attacked Ifelodun Microfinance Bank, Ikirun in Osun State. The robbers tied some hunters, broke an Automated Teller Machine, and carted away the money in it, according to a report by The Punch.

On the 4th of December, 2018, Gunmen kidnapped nine persons in an attack near the Osun State College of Technology, OSCOTEH, Esa-Oke. The gunmen also reportedly killed one person in the attack.

Also on the 23rd of September, 2019, suspected Fulani herdsmen attacked a commercial bus in Ajeoku Village in Obokun Local Government Area of Osun State and kidnapped some passengers. The NST puts the value of kidnapped victims at eighteen.

In a similar development, gunmen shot one person and kidnapped two others in Iwo on the 2nd of November, 2019.

At least seven persons were kidnapped along the Ilesha- Akure Expressway by suspected armed Fulani herdsmen on the 8th of February, 2021.

Similarly, a senior lawyer in Ibadan, Oyo State, Musibau Adetunmbi was also kidnapped in Iwaraja, Osun State on the 16th of April 2021.

Also, two Chinese expatriates were abducted at a mining site located in Okepa/Itikan village in Ifewara, Atakumosa-West local government area of the state on the 5th of April, 2021. The abduction came barely two months after three Chinese were abducted and their police guard killed in the state.

Furthermore, bandits invaded Ilupeju area, Ofatedo community in Egbedore Local Government Area of Osun State on the 29th of June, 2022. The Nation newspaper reported that the bandits had written a threat letter to the community demanding N20 million before the attack.

On the 28th of August, 2021, gunmen killed two persons and kidnapped three others in Alapata village of Modakeke area of the state.

Similarly, no fewer than five people were killed in Ilesha during clashes between two rival cult groups and suspected land grabbers on the 29th of January, 2022.

In addition, on the 21st of February 2022, a clash between rival cult groups in some areas at Ilesha, Osun State, claimed the lives of about ten people.

The claim by Gboyega Oyetola that Osun state has not had serious cases of banditry, kidnapping, and armed robbery since he became the governor is MOSTLY FALSE; as findings show that several cases of such incidents have been recorded while he superintends the state affairs.