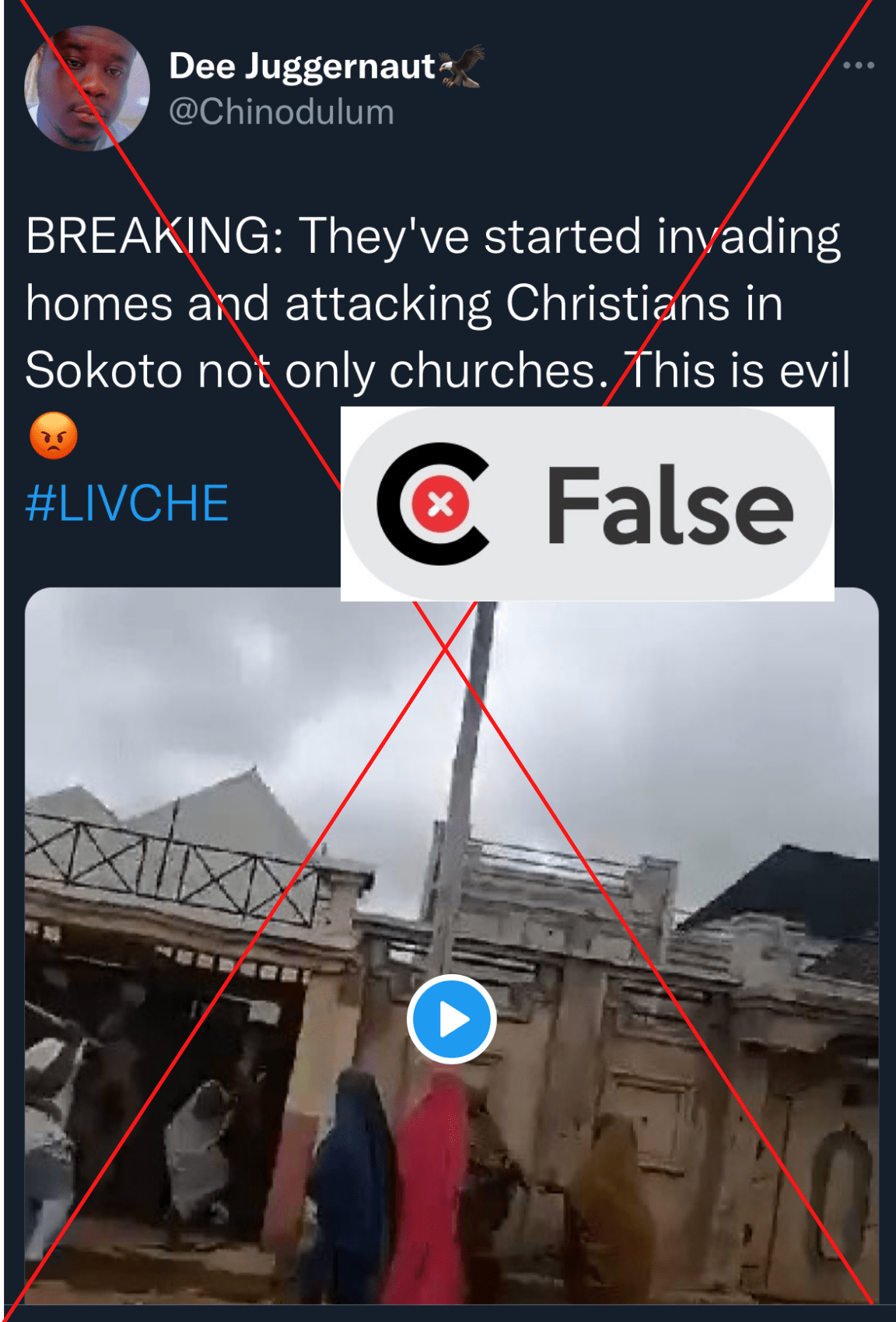 Screenshot of the viral video posted by a Twitter user.
Reading Time: 2 minutes

A VIRAL video showing a woman being dragged out from the gate of an apartment and flogged by some men has surfaced on social media alongside a claim that it shows Muslims attacking homes of Christians in Sokoto state.

The video became viral following protests in the Nigerian North-Western state against the arrest of suspected murderers of Deborah Samuel, a student of Shehu Shagari College of Education, Sokoto.

Miss Samuel was killed by an irate mob over alleged blasphemy last Thursday in the state. This led to the arrest of some suspects who took part in the killing.

A Twitter user, Dee Juggernaut, with the username @Chinudulom tweeted the video with a caption:

“BREAKING: They’ve started invading homes and attacking Christians in Sokoto not only churches. This is evil.”

Another Twitter user, Chekwube Nwufo, with the username: @nchecks2005 tweeted the video with a caption:

“Disturbing video of Christian woman dragged out by Sokoto Muslims hitting and torturing her. This is heartbreaking.”

The video was also tweeted with similar captions by several Facebook and Twitter users such as this.

When The FactCheckHub subjected the keyframes in the video to Google Reverse Image Search, the result shows that the video has been online since 2021.

Findings show that the video was shared last year with a narration suggesting that of a woman-kidnapper caught and beaten in Kaduna.

In an old version of the video published by a YouTube page, El-Najeeb Production, on the 26th of September 2021, a narrator who spoke in Hausa language in the video claimed that the video shows a woman who engaged in child abduction and trafficking in Kaduna state and was caught by people in the community.

The narrator said three children were found in her apartment when the residents ransacked her house.

A Facebook user, Kamaldeen Abdullahi had earlier posted the video on August 28, 2021, with the same narration.

A resident of the community who identified himself as Nasir told The FactCheckHub that the incident happened in Sabon Garin Palladan in Zaria, Kaduna state.

The claim that the video shows Muslims attacking Christian homes in Sokoto state is FALSE; findings show that the video emanated from an incident that happened in Kaduna state and is not recent.