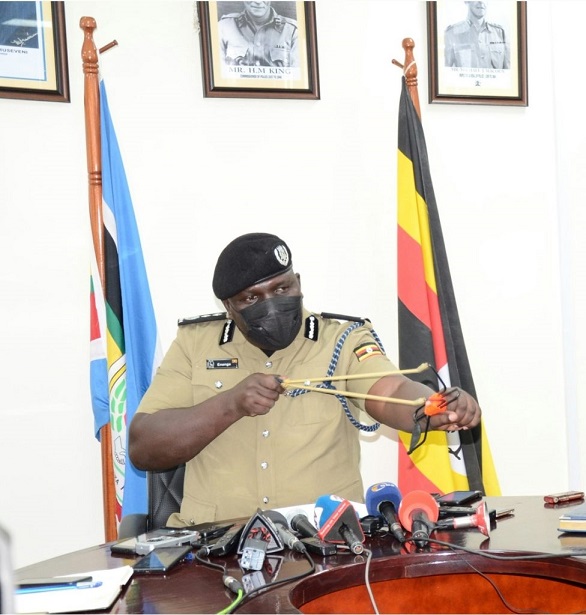 A VIRAL photo showing a man in uniform while holding a catapult with his two hands has surfaced on social media alongside a claim that it shows a new Ugandan police spokesman shooting a catapult at a journalist for asking an ‘irrelevant’ question.

In the photo, the man who wore a cornsilk brown-coloured uniform with a black cap sat down with microphones and other gadgets placed on his table. He was seen pulling back the elastic band of the catapult while targeting a certain direction.

A Twitter user, Fully Vaxxed G!, with the handle @_Sir_CharlesR tweeted the photo with a caption: “Newly appointed Uganda police spokesman hits News reporter with a caterpult for asking irrelevant question (sic).” The tweet was shared more than 9,000 times on Twitter as of 11PM on Wednesday, March 16, 2022.

The tweet was also shared on other social media platforms including Facebook and blogs in Nigeria, among other countries as archived here and here.

A Google Reverse Image Search of the photo by The FactCheckHub revealed that the image was from a press release published on the website of the Uganda Police Force on April 12, 2021.

According to the release, the catapults were confiscated during a military operation by the country’s Directorate of Crime Intelligence, noting that they were capable of firing metallic projectiles or bearings.

Video footage seen by The FactCheckHub on YouTube shows that the official spokesperson for the Uganda Police  Force, Fred Enanga, was demonstrating how to use a catapult while addressing a press conference, saying it poses serious danger to the safety and security of Ugandans.

This is contrary to the viral claim on social media that he shot a journalist for asking irrelevant questions.

The Ugandan Police also debunked the claim under another post of the image tweeted by one Twitter user, Ahmednasir Abdullahi SC with the handle @Ahmednasirlaw on March 12, 2022. The tweet which has now been deleted was archived here.

Similarly, the claim has also been debunked by another fact-checking platform, AFP Fact Check as seen here.

The claim that the Ugandan police spokesman hits a news reporter with a catapult for asking irrelevant questions is FALSE.

How correct is Saraki's claim on group crowd-funding for presidential nomination forms?