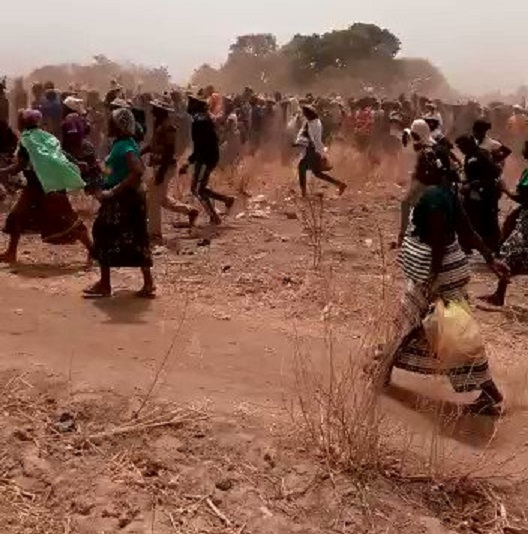 Residents fleeing after gunmen killed at least 138 people and wounded dozens of others in an attack on Solhan village in Yagha province, Burkina Faso in June 2021.
Reading Time: 3 minutes

A Twitter user with the handle @Eonsintelligenc has tweeted a video that shows some residents fleeing a community with a claim that the video shows residents of some communities in Niger state fleeing their homes as a result of bandits’ attacks in the areas.

The 30 seconds video (now deleted) was tweeted on the 3rd of April, 2022, with the caption: “Another video showing Residents fleeing their homes after bandits attacked the border Communities within Shiroro, Munya & Kafikoro LGAs 3 days ago. They are said to have converged at the Shiroro staff quarters  to proceed to the IDP camps in Gwada and Zumba in Shiroro LGA.”

Located in Central Nigeria, Niger state is the worst hit by bandits’ attacks among states in Nigeria in the first quarter of  2022 with at least 787 fatalities. Shiroro, Munya and Kafikoro are local government areas in the state.

When The FactCheckHub subjected the keyframes of the video to multiple Reverse Image Search, the results show that the video has been online since June 2021.

Findings revealed that a longer version of the video was published on the Facebook page of SAIDA International e.V, a German-based international organization on the 8th of June, 2021 with a caption in German language indicating that the video emanated from Burkina Faso.

“Fleeing their own country: As if the people of #BurkinaFaso, one of the poorest countries in the world didn’t have enough to worry about, they now have to leave their possessions and goods behind and flee murderous gangs…” a Google translation of the Facebook post read.

The 1 minute and 32seconds longer video was also posted the same day on the YouTube channel of Lobs Paalga TV, a Burkina Faso-based Television station with the title: “vidéo d’un exode attribué aux habitants de solhan.” Using Google Translation, it reads: “video of an exodus attributed to the inhabitants of Solhan.”

Further findings show that the incident was also reported by Al-Jazeera on the same date.

“More than 7,000 families fled their homes in Solhan village in Burkina Faso’s northern region following the massacre that claimed the lives of several people,” the news medium reported.

UPDATE: Our Editorial boards attention has been called to this post done by members of our team earlier today based on initial info that suggest it to be that of the incident in Shiroro LGA, Niger State some 3 days ago. In view of new info which suggest otherwise, we apologize. https://t.co/S3hVO5Djmv

“Our Editorial board’s attention has been called to this post done by members of our team earlier today based on initial info that suggests it to be that of the incident in Shiroro LGA, Niger State some 3 days ago. In view of new info which suggests otherwise, we apologize,” the tweet read.

It will be recalled that The FactCheckHub had in November 2021 fact-checked the same Twitter user when it posted a video of a collapsed mining site claiming that the incident happened in Zamfara state.

The claim that the video shows residents fleeing their homes in Niger state communities is FALSE; as findings show that the video emanated from the crisis that rocked Solhan village in Yagha province, Burkina Faso in June 2021.

Viral image of Osinbajo dispensing fuel has been online since 2017