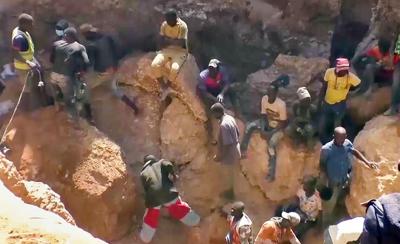 A TWITTER handle, Eons Intelligence with the user ID @eonsintelligenc on Tuesday, November 9, shared a video of a collapsed mining site with the caption the incident happened in Zamfara state.

“Just In: Over 100 miners are suspected to have been buried under the rubble in Zamfara gold mine collapse. Rescue efforts in progress,” the caption of the video which has over 11,000 views read.

The video shows a collapsed mine site in Zamfara State, with miners buried under the rubble.

Checks by The FactCheckHub show that the video emanated from an artisanal gold mine collapse in Niger Republic and not Zamfara State.

A Google reverse image search on the video showed if surfaced online on Monday, November 8, this was a day before it was shared by Eons Intelligence.

Similarly, the news of the gold mine collapse, killing several persons in Southern Niger was reported in  multiple media like Reuters, Aljazeera.

Also, the image in the report by Washington Post is from the same scene as the video.

Video of a mining site where some people were believed to have been trapped is not from Zamfara but the Niger Republic thereby making the claim FALSE.