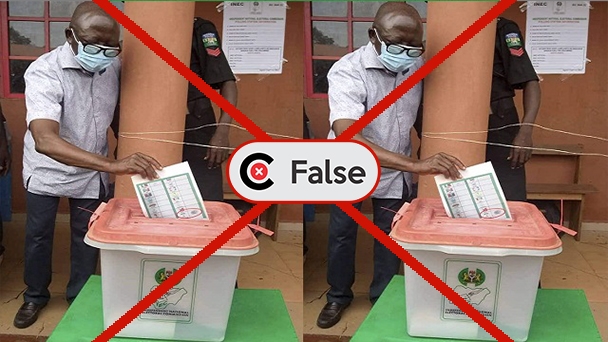 A viral post on social media claimed that a former National Chairman of the All Progressives Congress (APC), Adams Oshiomhole, voted for the Peoples Democratic Party (PDP) at the Edo gubernatorial election held on September 19, 2020.

The post with a picture showing Oshiomhole holding the ballot paper thumb printed for the PDP has been shared severally on Twitter and WhatsApp groups.

PDP Vanguard shared the picture on Twitter with the caption:  “LOL! Even Oshiomhole is voting for @GovernorObaseki!”

Oshiomhole voting for the PDP allegedly at the election would mean he voted for Godwin Obaseki, the incumbent governor of the state, who is running for a second term.

The duo have been in the news for being at loggerhead.

That an image shows a former APC National Chairman, Adams Oshiomhole voting for the PDP in the 2020 Edo Governorship election.

The FactCheckHub findings revealed that the picture depicting Oshiomhole voting PDP has been manipulated.

A Google Reverse Image search shows the same image posted by Premium Times Centre for Investigative Journalism, @ptcij.  The image was showing the back of the ballot paper unlike the front as shown in the viral image. Thus, the party he voted for cannot be seen.

In addition, a video of the same event posted by a Twitter account, APCYF South West also showed that the viral image was manipulated. In the video, it was the back of the ballot paper that was shown.

The claim that a former APC National Chairman, Adams Oshiomhole, voted for the PDP in the 2020 Edo Governorship election is FALSE. The image was manipulated.