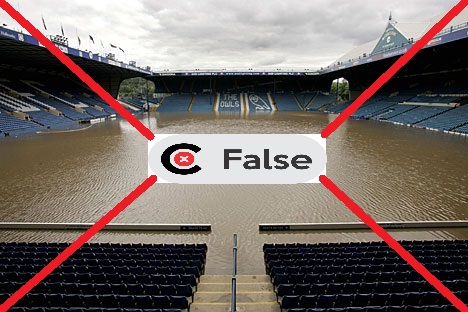 Although, the roof of the stadium was reportedly leaking and part of the pitch water-logged during the official commissioning of the stadium, a picture has, however, emerged on social media, with people claiming it emanated from the Lekan Salami Stadium.

A Facebook user, Abdullah Ayofe Olaniyi, shared the picture of the pitch submerged by flood, claiming it is that of the recently commissioned Lekan Salami Stadium.

Checks by the FactCheckHub show that the picture emanated from the 2007 flood incident at the Hillsborough pitch of Sheffield Wednesday, located in South Yorkshire, England and not that of the Lekan Salami Stadium in Adamasingba, Ibadan.

A Google reverse image search conducted by the FactCheckHub shows the image first hit the internet on June 26, 2007, when Sheffield Wednesday’s pitch known as Hillsborough was submerged by flood.

According to a Dailymail report, Sheffield Wednesday was forced to close the Hillsborough stadium after it was submerged with heavy floods.

The viral image of a football pitch submerged by floods and shared by a Facebook user was that of the 2007 flood incident at the Hillsborough pitch of Sheffield Wednesday in England, and not that of Lekan Salami Stadium, thus making the claim FALSE.

No! Kenyan government official did not threaten CNN’s Larry Madowo on live TV