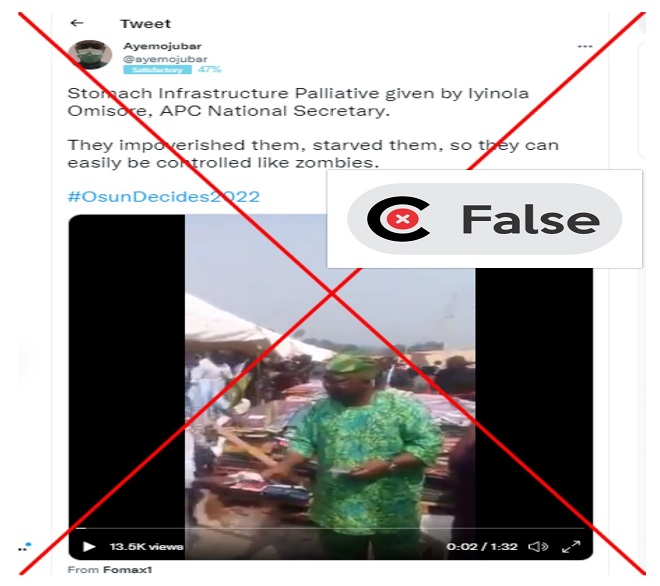 A Twitter user, Ayemojubar, with the username @ayemojubar, tweeted the video on Friday, July 15, 2022, with the claim that Omisore was seen giving stomach infrastructure to the people.

“Stomach Infrastructure Palliative given by Iyinola Omisore, APC National Secretary.They impoverished them, starved them, so they can easily be controlled like zombies,” his tweet read.

That the video shows Iyiola Omisore sharing money with the electorate.

Findings by The FactCheckHub revealed that the claim is FALSE.

A Google Reverse Image Search conducted on visual frames from the video revealed that it has been on the internet since 2014.

Further checks revealed that the incident was reported by Ynaija when it happened then in Osogbo, Osun state capital.

“There were thousands of people at the field beside the OYESTECH Training Centre in Osogbo this afternoon. They were there to receive a sum of money per person from the Omisore Youth Support,” the report read in part.

Omisore was an aspirant in the 2014 Osun State gubernatorial election.

The claim that the video shows Iyiola Omisore sharing money with the electorate is FALSE; findings revealed that the video has been on the internet since 2014.