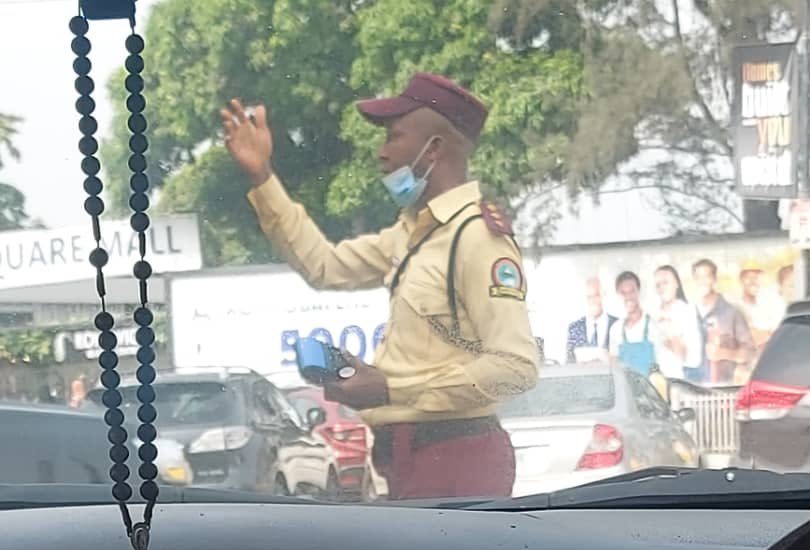 A screenshot of the tweeted photo.
Reading Time: 2 minutes

A TWITTER user, #LagosTrafficReports with the user ID @TrafficChiefNG, on Wednesday, March 9, 2022 claimed that an official of the Lagos State Traffic Management Authority (LASTMA) was caught with a Point of Sale (PoS) machine.

The user, in a now-deleted tweet, questioned if PoS machine is now a gadget used for traffic control.

Alongside the tweet was a picture of the said LASTMA official with a gadget in his hand.

“[4:16PM] @LAtunwa: @followlastma Today 9th March, 2022 this LASTMA official was captured right at Falomo roundabout with POS in his hand. When has POS machine added to the gadgets to control traffic? #TrafficChief,” the tweet read.

Another Twitter user, Traffic Updates + Useful Info with the user ID @trafficbutter, also repost the same tweet now archived here. However, this user, who is yet to delete the tweet, has over 356,000 followers on Twitter.

Checks by the FactCheckHub show that the claim is FALSE.

Findings revealed that the LASTMA officer was holding a Traffic Management Solution (TMS) device and not a PoS machine.

The Lagos State Government had in June 2021 launched the TMS device, which looks like a PoS machine.

TMS, a handheld device, would allow for real-time capture of picture and video evidence of road traffic and vehicle compliance violations as they occur, Premium Times reported.

Similarly, the Senior Special Assistant (SSA) to the Governor of Lagos State on New Media Jubril Gawat clarified that it was a TMS device and not a PoS.

“That’s NOT a PoS Machine; it’s a Traffic Management Device that captures traffic offender information instead of chasing them around. It captures your plate number, you get an SMS sent to you at home with evidence of your offence, This device is for LASTMA for now,” he said in a tweet via his Twitter handle @Mr_JAGs.

The claim that a LASTMA official was caught with a PoS machine in Lagos is FALSE; findings show he was holding a TMS device.