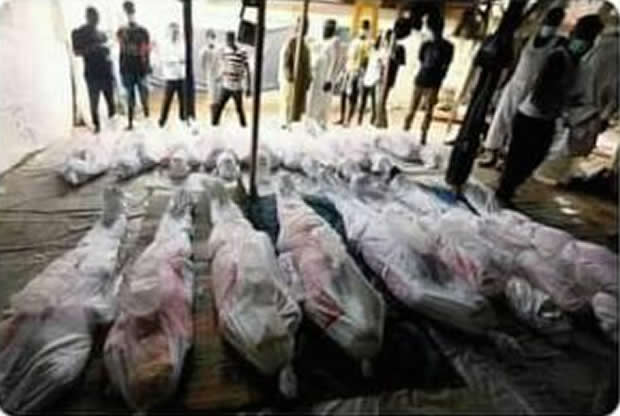 Members of the Islamic Movement of Nigeria preparing the bodies of members killed when the Nigerian Army opened fire during the group’s protests in the capital Abuja this week. Credit: Afolabi Sotunde/Reuters
Reading Time: 2 minutes

An image of shrouded bodies has been posted multiple times on social media with the claim that it shows casualties from the Lekki toll gate incident which took place on October 20, 2020.

A Facebook user, Emmanuel Rowland, posted the photograph with the caption, “Lekki shooting dead bodies”. The post has been shared over 552 times as at 7:00pm on October 28, 2020.

The picture was also tweeted by a Twitter user, @AdeolaAminu, who later deleted it.

That photo shows casualties from the Lekki  Toll Gate incident which happened on October 20, 2020.

Checks by the FactCheckHub show that the picture is FALSE.

The image predates the Lekki Toll Gate incident and it is of the Islamic Movement of Nigeria (IMN) popularly referred to as Shi’ites and not of persons protesting Police brutality in Lekki area of Lagos, Nigeria.

Several misleading posts flooded the internet following the aftermath of  Tuesday, October 20, 2020, when it was reported that there were gunshots at the Lekki toll gate.

The Lekki toll gate was the epicenter of the protests against police brutality and bad governance  under the #EndSARS movement that had rocked the country for days.

The FactCheckHub had earlier  fact-checked one of such pictures.

To verify the claim that the image with shrouded bodies are casualties from the #EndSARS protest, the FactCheckHub conducted a reverse image search on the picture using image verification tools such as Google and TinEye.

The findings revealed that the picture was online as far back as November 2, 2018.

The New York Times had used the picture which was credited to Afolabi Sotunde – a Reuters photographer –  in a report.

“Members of the Islamic Movement of Nigeria preparing the bodies of members killed when the Nigerian Army opened fire during the group’s protests in the capital Abuja this week. Credit: Afolabi Sotunde/Reuters,” the caption of the picture read.

The picture was also used to illustrate news of the incident published by ABC News and CBCNews .

The FactCheckHub also reached out to the photographer, Afolabi Sotunde, who confirmed that he took the photo  in 2018.

He said the image shows the burial preparations for bodies of members of the Islamic Movement of Nigeria who died as a result of a clash with the Nigerian Army.

“I took the picture for Reuters sometimes in November 2018, when the members of the Islamic Movement of Nigeria who were shot by the Nigerian Army were being prepared for burial,” Sotunde told the FactCheckHub in a telephone conversation.

The claim is FALSE. The picture is that of members of the Islamic Movement of Nigeria who were killed in 2018 and not from the Lekki Toll Gate incident that happened in 2020.