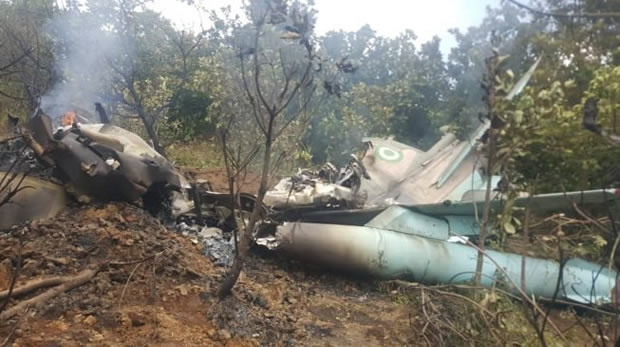 Wreckage of two jets belonging to the Nigerian air force which crashed in 2018 during an independence day aerial rehearsal.
Reading Time: 2 minutes

A PICTURE of aircraft wreckage has been shared multiple times online with the claim that, it is the wreckage of a Nigerian government fighter jet shot down by the Eastern Security Network (ESN).

The photo surfaced online following the news about a combined military and police operation in search of ESN camps and members at Orlu in Imo State on Thursday, February 18, 2021.

The ESN is a security arm of the Nigerian separatist group, the Indigenous People of Biafra (IPOB).

A Twitter user, Mazi Azubuike Onovo with the handle: @AzubuikeOnovo, who tweeted the picture on February 18, 2021, claimed that the ESN gunned down the jet which belongs to the Nigerian government.

He tweeted the picture with the caption;

(sic) BREAK NEWS– This one of the fighter jet that Nigerian government used against unarmed civilians in ORLU IMO state, I thank CHUKWU OKIKE for #ESN who intercepted and destroy the jet to save the innocent civilians. Two dawn kudos to #ESN.We move on.

The news of the jet being shot down by ESN was also published on a blog, kbase.com.ng.

It was also published on Nigeria’s foremost forum, Nairaland, before it was later deleted.

The photo shows the wreckage of a Nigerian government fighter jet shot down by the Eastern Security Network (ESN).

Multiple searches conducted by the FactCheckHub show that the photo first appeared on the internet in September of 2018.

A search conducted by the FactCheckHub using the Google Reverse Image search revealed that the picture shows the wreckage of two military aircraft that crashed on September 27, 2018.

According to the news that was reported here, here and here, the two jets belonging to the Nigerian Air Force, crashed in Abuja during an aerial display rehearsal ahead of the October 1, 2018 Independence Day celebration.

The claim that the photo shows the wreckage of a Nigerian government fighter jet shot down by the Eastern Security Network (ESN) is FALSE.

The photo was from the wreckage of the military jets crash which happened in Abuja on September 27, 2018.

Oyo crisis: Viral photo of man drenched in blood was NOT shot in 2021