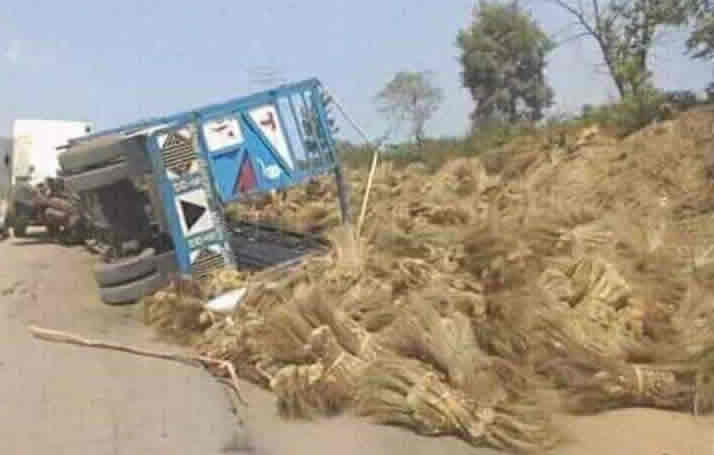 AHEAD of the All Progressives Congress (APC) convention slated for February 26, 2022, a photo of a truck that fell and spilt the brooms it was conveying on the road has circulated online.

According to the caption on the photo which was retrieved on WhatsApp on Monday, February 7, 2022, the truck was said to be conveying brooms meant for the forthcoming APC convention.

“A truck carrying Broom to Abuja ahead of APC National Convention got accident. Pray for APC,” the caption reads.

Another online user on Wednesday also posted the same image on a popular Nigerian blog, Nairaland, as archived here.

A truck carrying brooms to Abuja ahead of the APC National Convention had an accident.

Checks by The FactCheckHub show that the image has been on the internet since 2018.

A Google Reverse Image Search on the image shows that the image first appeared on the internet on November 17, 2018, when it was posted on a Facebook page, Hope for Nigeria, as archived here.

According to the caption then, the image was said to be of a trailer carrying brooms meant for APC political campaign, which had an accident along the Lokoja-Abuja expressway.

It was also posted on Nairaland on November 18, 2018, as archived here.

The claim that a truck carrying brooms to Abuja ahead of the APC National Convention had an accident is FALSE; the photo has been on the internet since 2018 and is not recent.