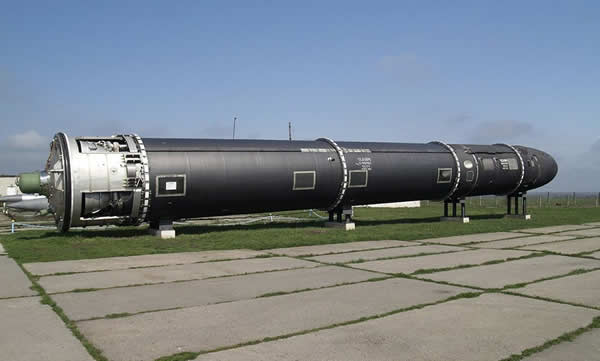 AMID the ongoing Russia – Ukraine crisis, a viral post shared on Facebook on Monday, February 28, 2022, claimed that Russia has a nuclear missile called ‘Satan 2’ capable of destroying the whole world.

The post which contains some texts and an image purported to be the missile was published by a Facebook Page named Robert Mugabe Hilarious Quotes. It added that the weapon is only owned by Russia.

“This weapon is only owned by Russia and it’s capable of destroying the whole world.

“A media user said ‘If Putin gets angry enough to deploy this thing, even Angel Michael in heaven will run to take cover first till it has finished exploding before he will blow his own trumpet.’ #Musbizu,” The post reads.

A Google Reverse Image Search of the image revealed that the photo is that of Russia’s nuclear missile, RS-28 Sarmat otherwise known as Satan 2. However, the claim that it can destroy the whole world is FALSE.

According to Missile Threat, a website that brings together authoritative and up-to-date open-source information and analysis about ballistic and cruise missiles around the globe, RS-28 Sarmat development began sometime in the 2000s.

Russia completed its first prototype of the missile in late 2015.

“Satan 2” was unveiled in 2016. It is capable of destroying an area the size of Texas or France, according to a May 2016 news report by Sputnik, a state-backed Russian news agency. It was also reported by CNN.

The Russian government, in another news report by the Express, said Satan-2 can evade the United States’ defence shield and is capable of destroying an area the size of England and Wales — or Texas.

“The new Satan 2 has largely the same capabilities as the Satan: Both missiles can reach the east and west coasts of the US, both can travel miles in a single second, many times the speed of sound, and both can carry multiple independently targetable warheads,”  says media report by the Business Insider.

Similarly, a 2016 report by the NBC news says “Known colloquially as ‘Satan 2,’ the missile will replace the RS-36M — which was dubbed ‘Satan’ by NATO after entering service in the 1970s.”

Robert Kelley, a former nuclear weapons expert at the U.S. Department of Energy, said the new missile was likely an upgrade of electronics — rather than explosive power or range.

“The range of the missiles will be about the same, the explosive destructive power will be about the same [but] the reliability, flexibility and confidence [in the warheads’ ability to hit their targets] will go way up,” says Kelley, who is currently a distinguished associate fellow at the Stockholm International Peace Research Institute.