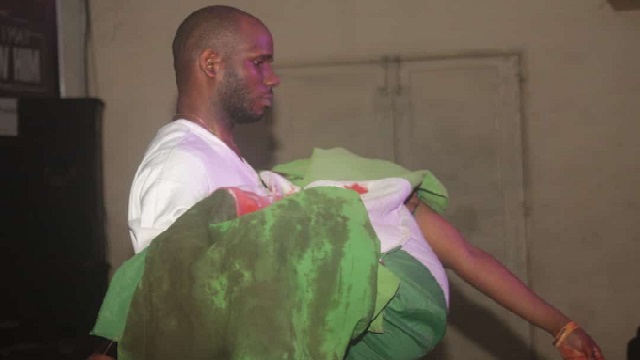 This image has erroneously been use to illustrate Lekki toll gate incident and passed as victim from the event that happened on October 20, 2020.
Reading Time: 3 minutes

A photo of a man carrying a woman wrapped in a blood stained Nigeria flag has been shared repeatedly on social media as one of the victims of Lekki Toll Gate incident.

A twitter user @seefinish tweeted the picture with caption, “RIP fallen hero, your death shall not be in vain” this was accompanied with hashtags like #LekkiMassacre #EndSARS #Genocide #StopNigeriaGovernment #LekkitollgateMassacre.

Another Twitter user, @fbilash while responding to a tweet by the Lagos State Governor, Babajide Sanwo-Olu also tweeted the same picture with the caption, “Did you have enough time to visit her too?

This was not limited to the Nigerian media,  as it also went viral in Ghana where GhanaSummary, Ghbase and MyNewsGhana used the picture in illustrating their reports.

“Photo: See the sad moment female protestor died and was wrapped in a bloody Nigerian flag,” the news read on MyNewsGhana.

That the photo of a man carrying a woman wrapped in a blood stained Nigerian flag is from Lekki Toll Gate incident.

Checks by the FactCheckHub shows that it is False.

On Tuesday, October 20, 2020, news broke that Nigerian soldiers shot at #EndSars protesters that gathered at the Lekki Toll Gate in Lagos state.

End Special Anti-Robbery squad is a social movement calling for good governance and an end to police brutality which had led to street demonstration. One of the rallying point for protesters is the Lekki Toll Gate.

While both local and international media organisations were reporting the news of what occurred at the Lekki Toll Gate, the picture of the woman wrapped in a blood stained Nigerian flag was shared repeatedly on the internet.

Nigerian singer, Yemi Alade, in a now deleted post also shared the picture on her verified Facebook page with that caption, “Stay safe”.

Reacting to her post, Oyinye Francis, said the photo was false, while pointing out that it emanated from a drama done in  commemoration of Nigeria’s independent anniversary on October, 1, 2020.

“Please ma she’s not dead, it was a drama we acted on 1st October 2020 in NCCF Akwa Ibom state ‘drama night,’ themed ‘Heal our land oh lord’. I can send you the drama video,” Francis wrote.

In a bid to verify the picture, The FactCheckHub reached out to Joshua Ogbodo, the President of the Nigeria Christian Corpers’ Fellowship (NCCF), the Akwa Ibom State chapter, who disclosed that the photo was from a scene from the association’s drama.

“That picture of the man carrying a lady covered in Nigerian flag appearing dead is a picture from our stage drama night tagged “Lord, heal our land” that took place on October 1, 2020 at the NCCF secretariat,” Ogbodo told The FactCheckHub in a telephone conversation.

Similarly, the NCCF has in a press release debunked the claim.

The release signed by the President and Secretary stated that the picture was not from the Lekki toll gate incident but from a drama acted by the association.

Similarly, the NCCF Akwa Ibom State has on their Instagram page released pictures and video from the drama to justify their claim.

In addition, the picture has been posted since before the Lekki Toll Gate incident.

If My people, who are called by My name, shall humble themselves, pray, seek, crave, and require of necessity My face and turn from their wicked ways, then will I hear from heaven, forgive their sin, and heal their land. #DramaNight2020 #NccfAkwaibom #corpers #nysc #drama #mountzionfilms #repost #repost ##nysc_9ja #drama #nysc_9ja #nyscmoments #actor #actress #actresslife #actressgallery

The claim is FALSE, the picture emanated from a drama by NCCF Akwa Ibom State and not from the Lekki Toll Gate incident.