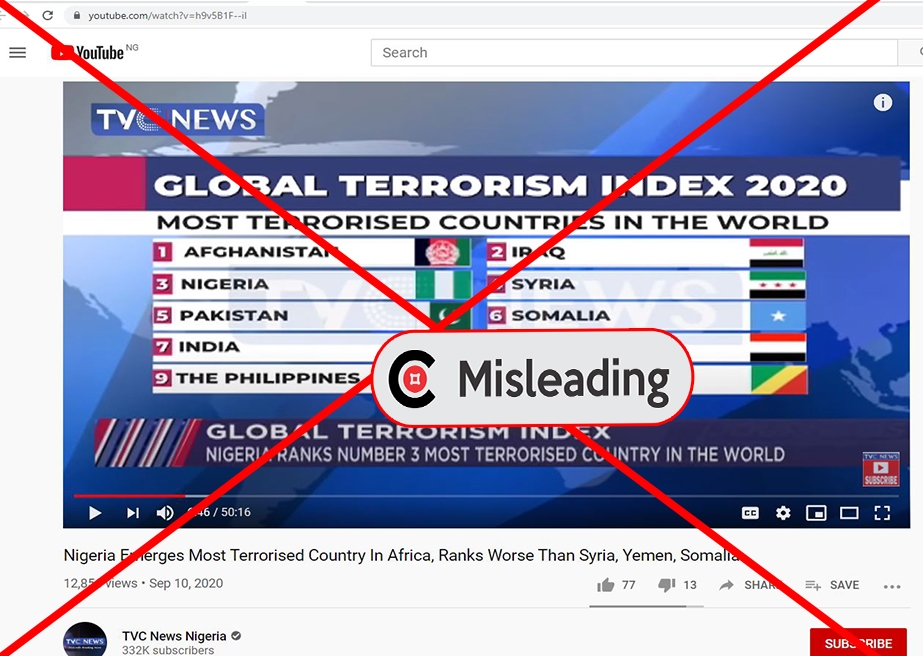 A screenshot of the misleading claim

ON September 10,2020, a report by a television news station – Television Continental Nigeria (TVC News Nigeria) –  claimed that Nigeria has emerged the third most terrorised country in the world.

This claim which has been republished by several blogs including hallmarknews and Salonedaily  has also  gone viral on social media.

A screenshot of the infograph used by the TVC to present the report has been tweeted by several Twitter influencers  including PDPVanguard, Charles the 1st,  Chidi Odinkalu. and  Ayemojubar – these Twitter handles have large followings on the social media platform.

That Nigeria ranked third as the most terrorised country in the world in the 2020 Global Terrorism Index.

#FACTCHECK: Is #Nigeria ranked 3rd most terrorised country in the world in the 2020 #GlobalTerrorismIndex, according to the @tvcnewsng?

The FactCheckHub verified that the claim emanated  from a  TVC programme tagged Journalists Hangout which is anchored by Ayodele Ozugbakun.  The episode where the claim was made was published on the TVC’s YouTube channel on September 10, 2020 with the headline “Nigeria emerges most terrorised country in Africa, ranks worse than Syria, Yemen, Somalia”.

The episode focused on discussing the index as a 2020 ranking.

The Global Terrorism Index (GTI) is a ranking report published annually by the Institute for Economics and Peace (IEP). It was developed by IT entrepreneur and IEP’s founder, Steve Killelea. The index is often used to systematically rank the nations of the world, according to terrorist activities.  It has been in existence since the year 2000.

The GTI ranks based on data gotten from the Global Terrorism Database (GTD).

Checks by The FactCheckHub shows that the GTI is released in November annually, and the most recent index is still the one released  in November, 2019, while no data has been released for the year 2020.

Similarly, The FactCheckHub reached out to the Institute – IEP-  to confirm if the 2020 Global Terrorism Index has been released. The insititute, on September 15, 2020,  in response to the enquiry stated that the 2020 global terrorism index is yet to be released.

“The Global Terrorism Index 2020 will be released in November 2020 on a date still to be confirmed,” the mail reads.

A look at the previous records shows that Nigeria ranked 3rd in the 2018 and 2019  but the data for the 2020 as put forward by TVC has not been released, thereby making the claim MISLEADING.

Based on information presented above, the claim that Nigeria ranked third as the most terrorised country in the world in the 2020 Global Terrorism Index is MISLEADING.

Is the number of worldwide coronavirus deaths over 900,000?

Can walking barefoot increase the size of a man’s genital?