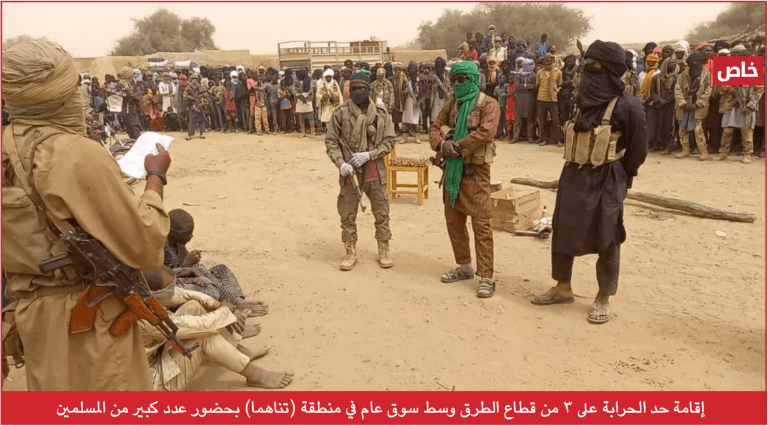 Islamic State in the Greater Sahara (ISGS), rounded up the three accused bandits in the local market of Tin-Hama in Mali’s northern Gao region. The photos show the scene in Tin-Hama’s market prior to the amputations.
Reading Time: 2 minutes

A TWITTER post shared on May 24, by Nnamdi Kanu, leader of a separatist group in Nigeria known as the Indigenous People of Biafra (IPOB) claimed that “ISWAP, Boko Haram and Fulani boys”  go around in public with AK47 guns without hiding.

Kanu attached a picture of some men wearing turban carrying rifles in an open field surrounded by onlookers to the tweet which had gathered 6,256 retweets and 5,979 likes as of 4pm of May 27.

“ISWAP/BH #Fulani boys chilling in public, in broad daylight with AK47, educating fellow #Fulani men on their pathway to the Atlantic Ocean. No army, no police. No air strikes, no shoot at sight. No @CatrionaLaing1

Meanwhile, in Biafraland, young men are being shot at sight,” the tweet read.

Checks by the FactCheckhub show that the claim is MISLEADING.

Nnamdi Kanu is notorious for sharing fake and misleading contents on his social media pages. The FactCheckHub had earlier fact-checked some of his claims here and here which were inaccurate.

A Google reverse image search conducted by the FactCheckHub shows the image was on the internet before Nnamdi Kanu tweeted it on his page.

Further findings show that the picture emanated from Mali, when a jihadist group known as the Islamic State in the Greater Sahara (ISGS) were implementing Sharia law by punishing three alleged thieves in a part of Mali.

A report by Long War Journal noted that the Islamic State released the photos within its weekly Al-Naba newsletter purporting to show its men enacting hudud punishments [or punishments mandated within Sharia law].

Similarly, a local source in Tin-Hama in Mali disclosed to Agence France-Presse (AFP) that the said armed men drummed up a crowd on May 2, a market day, and cut the limbs of three men they paraded as thieves.

The paper reported that UN peacekeepers in Mali have offered to help bring to justice the jihadists behind the amputation.

The photo of some men on turban carrying rifles in an open field surrounded by onlookers shared by Nnamdi Kanu is from Mali and not Nigeria; thus making the claim MISLEADING.