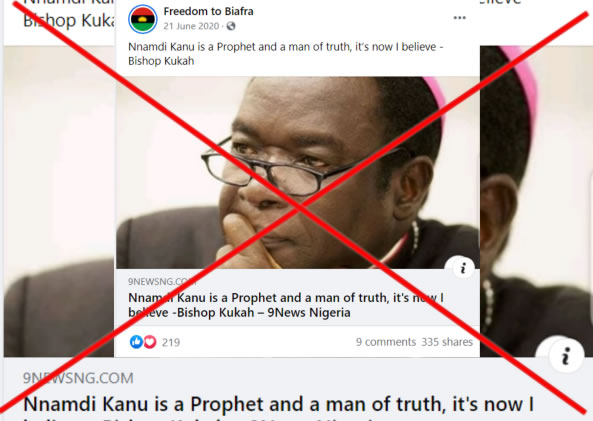 A news report shared online claimed that the current Bishop of the Roman Catholic Diocese of Sokoto Matthew Hassan Kukah recently described the leader of the Indigenous People of Biafra (IPOB) Nnamdi Kanu as a prophet and a man of truth.

The ICIR sighted the story after it was shared in response to a tweet by Kanu on May 15, 2021. The story claims that Kukah referred to the separatist leader as a “prophet and a man of truth, and he now believes him.”

The story also quotes the bishop as saying, “Until the narrative changes, I will support anything coming from Nnamdi Kanu. I have said it before, let the Igbo man lead Nigeria for four years, am sure the different will be very clear.”

Who is Nnamdi Kanu?

Nnamdi Kanu is a  British-based Nigerian who is fighting for Biafra secession. He is the leader of IPOB.

Kanu seeks to create an independent state for the people of the South-Eastern Region of Nigeria using IPOB.

He was arrested on treason charges in Lagos, Nigeria, on 14 October 2015 and detained for more than a year, despite various court orders that ruled for his release.

Kanu was released on bail from prison on April 28, 2017, after a public outcry that greeted the Buhari-led government which had ignored court orders over his release.

He relocated from Nigeria after soldiers of the Nigerian Army, in 2017, attacked his home.

He has been attacking the Nigerian government using various social media platforms.

The ICIR found the claim to be FALSE.

The story was published in two online blogs: NewZander.com and 9newsng.com, on June 21, 2020.

The ICIR’s checks on the website of the Catholic Diocese of Sokoto that publishes all statements credited to Bishop Kukah about Kanu found no traces of the claim being shared online.

Director of Communication of the Sokoto diocese Chris Omotosho, a priest, told The ICIR that Bishop Kukah never made the claim being credited to him on Kanu.

The claim that Bishop Hassan Kukah referred to IPOB leader Nnamdi Kanu as a prophet and a man of truth and he now believes him is FALSE; the bishop denied making the claim.

Did late COAS say over his dead body would there be Biafran and Oduduwa nations?