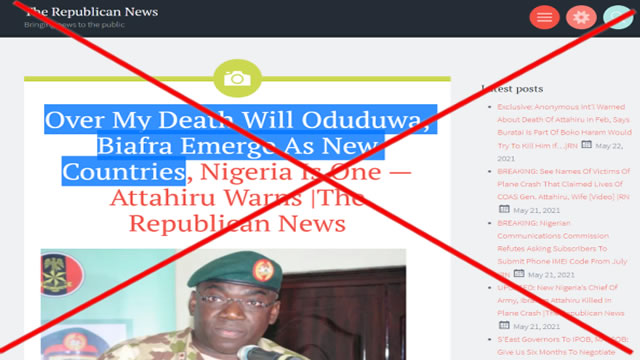 A few hours after the death of Chief of Army Staff (COAS) Ibrahim Attahiru in a military air crash in Kaduna, a viral statement surfaced online, claiming that he said over his dead body would there be Biafran and Oduduwa nations.

The viral statement, which surfaced online immediately after confirming his death, claimed that the COAS Lt. -Gen. Ibrahim Attahiru said he would not allow those trying to break out of Nigeria for their nations to succeed, stressing that the Nigerian Army had resolved to deal with secessionists threatening the peace of the country.

The claim published on the 23rd of March, 2021 by The Republic News and SundiataPost, and currently being widely shared on Facebook and Twitter after his death, alleged that Attahiru had said over his death would Oduduwa and Biafra emerged as new nations.

It is also being shared on WhatsApp with The Republican News link.

While the report on SundiataPost blog seems to have been replaced with a story about the Kogi State Governor Yahaya Bello’s statement on the COAS’ death, it still appears on Google search.

Attahiru died in a plane crash on Friday, May 21, 2021 en route to Kaduna State.

The aircraft was conveying him and 10 others, including three brigadiers general, two majors, two flight lieutenants, two sergeants and another crew member.

According to reports, they were travelling to Kaduna State for the Passing Out Parade ceremony of newly recruited military personnel scheduled on Saturday.

The ICIR found the claim to be FALSE.

Two national newspapers crosschecked by The ICIR, which reported the event on the 23rd of March, 2021, had no quote of  Oduduwa Republic or Biafra in the reports being linked to Attahiru.

They reported that the late COAS had said that the Nigerian Army would soon surmount attempts by some individuals to compromise the country’s territorial integrity by the declaration of sovereignty on behalf of ethnic nationalities in the country.

Attahiru, according to the national dailies, had, during the first Commanding Officers’ Workshop 2021 with the theme, ‘Repositioning the Nigerian Army to Defeat Contemporary Adversaries’ in a Joint Environment in Uyo, Akwa Ibom State, promised to deal with security threats across the country.

He was reported to have said, “The Nigerian Army under my leadership would remain proactive and jointly work with other security agencies to deal with threats facing the nation decisively.

“The Nigerian Army under my watch remains resolute and is poised more than ever before to decisively deal with individuals or groups that threaten the peace, security and stability of our great nation,” he said.

Army spokesperson Mohammed Yerima’s statement released on the event did not contain the said quotes. There was also no evidence that he mentioned Biafra and Oduduwa in his speeches since he assumed office in February this year till his death.

The statement also released by the Army after the event did not contain such reference credited to the late COAS.