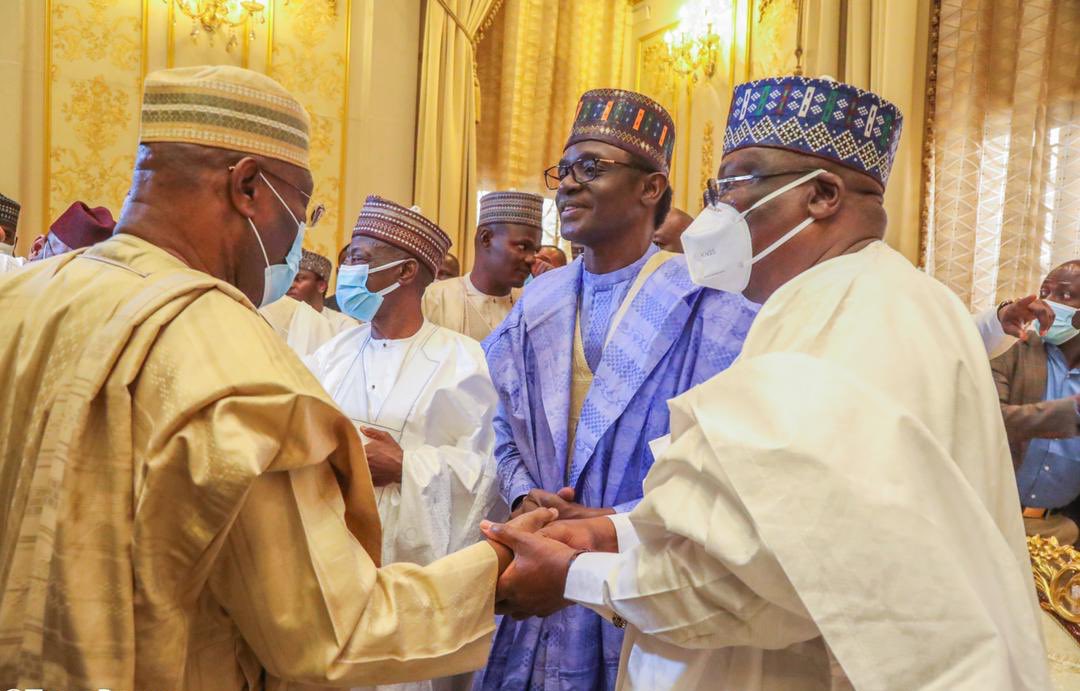 A screenshot from the viral video.
Reading Time: 3 minutes

A VIRAL video has surfaced online alongside a claim that the former Vice President and presidential candidate of Peoples Democratic Party (PDP), Atiku Abubakar, met with the Senate President, Ahmed Lawan, and some Northern governors on the platform of the All Progressives Congress (APC) hours after the APC presidential primary was concluded on Wednesday, June 8, 2022.

The video circulates following the emergence of Bola Ahmed Tinubu, a former governor of Lagos state as the presidential candidate of the APC in Nigeria’s 2023 general election. Lawan was among the aspirants in the APC presidential primaries defeated in the race.

A Facebook user, Adenike Otitoju posted the video on June 9, 2022 with a caption:

“Northern APC governors and Senate President went to visit Atiku. These are people that just handed ticket of their party to Bola Tinubu and in less than 24 hours they are flocking together with the flag bearer of an opposition party. If this is not conspiracy then tell me what  it is. They collected all his dollar, gave him ticket and turned their backs immediately* Something go happen. These people are funny.”

“Here’s the APC Governors and SP Lawan meeting with Atiku of PDP after the APC Presidential primaries. What is going on really???”

The video was also posted on Facebook by a news blog, Eagles Reporters, here and another user, Diran Odeyemi – a former Deputy National Publicity Secretary of the PDP – here with similar captions.

Similarly, a Twitter user, @MrSean_Jc, tweeted the same video with a similar caption:

The FactCheckHub traced the source of the video to a TikTok account with the username @boboske1 using bellingcat – a verification tool.

The results show that the video was uploaded on the 23rd of January, 2022. This was about four months prior to the APC presidential primary.

The Sun newspaper reported that Atiku, Lawan, and Buni met on the 22nd of January 2022 during a condolence visit to the family of Dahiru Mangal who lost his 85-year-old mother two days earlier.

Dahiru Mangal is a Katsina-based business mogul and the chairman and Chief Executive Officer of Afdin Group of companies Nigeria Limited and Max Air Limited.

Further checks unveiled a tweet made by Atiku on January 22, 2022, via his verified Twitter handle on the condolence visit.

The tweet read: “Earlier today, I paid a condolence visit to Alhaji Dahiru Mangal in Katsina over the loss of his beloved mother and matriarch of their family, Hajiya Murja Bara’u. I pray that Almighty Allah will comfort the family and grant her Aljannah Firdaus in Paradise.”

A closer look at the images attached to the tweet shows that the outfits that Atiku and other dignitaries wore during the condolence visit are the same as what they put on in the viral video.

A keyword search on some social media platforms also revealed footage of the same video posted on Facebook on the 18th of April, 2022 by a Facebook page, Igbo for Peter Obi. This shows that the video has been online before the APC presidential primary.

The claim that the video shows Lawan and some Northern APC governors meeting with Atiku shortly after the APC presidential primary is FALSE; findings show that the video has been online since January prior to the primary election.