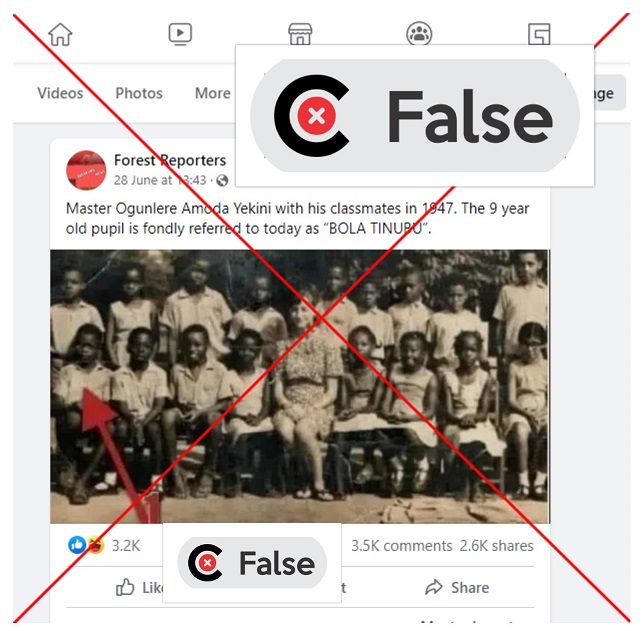 AHEAD of Nigeria’s 2023 general election, a group photo of some young school children has gone viral on social media with a claim that it shows the presidential candidate of the All Progressives Congress (APC) Bola Ahmed Tinubu and his primary school classmates.

The pupils were seen seated in a row; amidst them is a white woman who appeared to be their teacher.

In the photo, a pupil was labeled with an arrow with a caption that indicates that the child was Tinubu amidst his classmates when he was in primary school.

The photo has been circulating online amidst controversy over Tinubu’s primary and secondary school certificates.

Tinubu had told the Independent National Electoral Commission (INEC) that the academic certificates he received from his primary and secondary schools were missing.

The former governor of Lagos state further averred that he had two degrees from two American universities, which were allegedly stolen by ‘unknown soldiers’ during the military junta in 1994.

He made the disclosure in an affidavit submitted to the INEC as part of his eligibility filings for the 2023 presidential election.

In the said affidavit, Tinubu left the columns for his primary and secondary education unticked eliciting mixed reactions among Nigerians.

A Twitter account with the username, @vakkai tweeted the claim with a caption that read: “Master Ogunlere Amoda Yekini with his classmates in 1947. The 9 year old pupil is fondly referred to today as “BOLA TINUBU”. ”

The tweet has been retweeted more than 190 times and garnered more than 360 likes as of Thursday morning.

Another Twitter user, @Gen_Buhar tweeted the photo with a caption thus:

“Asiwaju Bola Ahmed Tinubu and his primary school classmates. It’s a shame that people you thought were a bit smart fell for such a cheap lie. No wonder they spent 7 years looking at the left ear. What a shame. When you allow yourself to be mislead by Bode George that has no Proper children’s. Since he has been convicted no one can cure his depression since then.”

The tweet has garnered over 40 retweets and more than 100 likes as of Thursday morning.

A Facebook page, Forest Reporters posted the photo with a caption that read: “Master Ogunlere Amoda Yekini with his classmates in 1947. The 9 year old pupil is fondly referred to today as “BOLA TINUBU”.”

The photo was also circulated on several WhatsApp groups.

That photo shows Tinubu with his primary school classmates.

When The FactCheckHub subjected the image to Google Reverse Image Search, the result shows that the image has been online since 2015.

The photo was also among the pictures published in May 2022 by Newswire under an article that featured Osinbajo’s biography.

There is no credible medium that portrays the image as that of Tinubu with his primary school classmates. Also, it was not posted by Tinubu or any of his media aides.

When contacted by The FactCheckHub, Osinbajo’s media aide, Laolu Akande, confirmed that the photo is that of Vice President Osinbajo.

“The image has gone round several times. It’s the VP,” he said.

The claim that the photo shows Bola Tinubu with his primary school classmates is FALSE; as findings show that the image is that of Vice President Yemi Osinbajo.