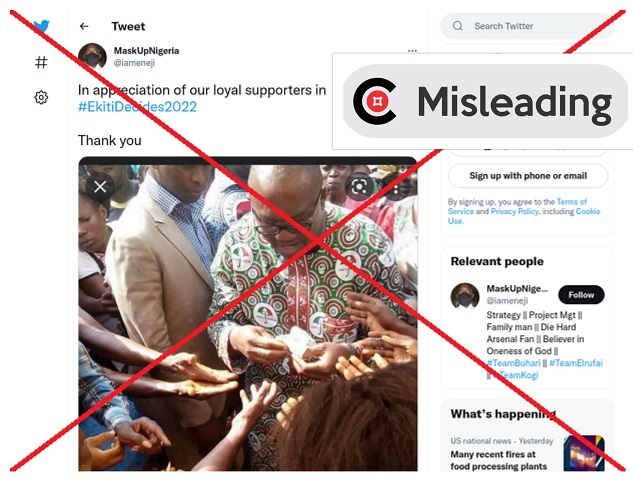 The tweet with the misleading caption.
Reading Time: < 1 minute

A Twitter user with the handle, @iamneji tweeted a photo showing Peter Obi, the presidential candidate of the Labour Party in the 2023 election, giving out money to people in a market with a caption linking it to the gubernatorial election in Ekiti State held on Saturday, June 18, 2022.

The caption of the tweet archived here reads: “In appreciation of our loyal supporters in #EkitiDecides2022 . Thank you.”

That Peter Obi shared money ‘in appreciation of our loyal supporters in #EkitiDecides2022’.

A Google Reverse Image Search of the image by The FactCheckHub revealed that the photo has been online since 2017.

This Peter Obi’s picture has surfaced on several blogs and social media pages since it first appeared on the internet.

Legit.ng reported that the photo shows Obi giving out money to traders when he led the Peoples Democratic Party’s (PDP) campaign for the Anambra State Governorship election at a market on October 18, 2017.

This photo, alongside others taken at the scene, was also published here and here.

The photo showing Peter Obi giving out money to traders has been online since 2017 and has nothing to do with the June 18 gubernatorial election in Ekiti state; thus, the claim is MISLEADING.