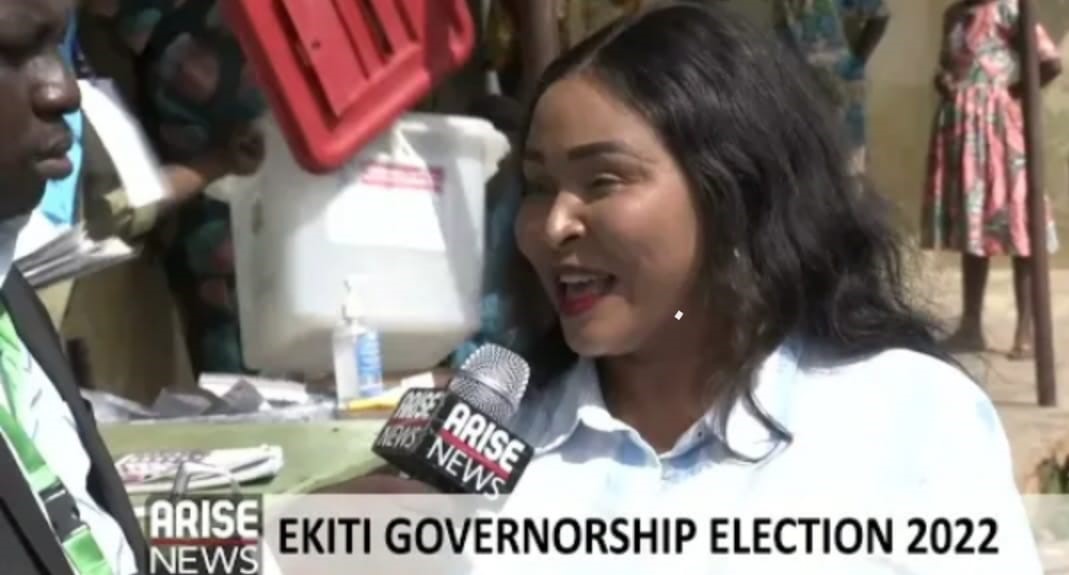 She disclosed this on Saturday, June 18, 2022, during an interview with Arise News correspondent, Oba Adeoye, at a polling unit in Ido-Osi Local Government Area of the state and monitored live on the television channel amidst the ongoing governorship election.

When asked to respond to the allegation of voters’ inducement earlier made by Segun Oni, the Social Democratic Party (SDP) candidate in the election, Fayemi’s aide described the claim as a mere allegation, insisting there was no such incident.

“It is an allegation. You don’t have proof. Anybody can just wake up and say they are buying votes there,” Bello stated during the interview.

“You cannot buy votes where I am against my party. All their agents are there. There is no way that could have been possible. There is awareness, and they have party agents. Everybody is on the ground.

“In the town, everywhere is calm. So, there is nothing like vote-buying,” she added.

Fayemi, the outgoing Governor of Ekiti State on the platform of the All Progressives Congress (APC), had described the electoral process as peaceful when he spoke to journalists.

That there was nothing like vote-buying in the 2022 Ekiti state governorship election.

Checks revealed that several incidents of vote-buying were reported at different polling units while the voting exercise was ongoing in parts of Ekiti state on Saturday.

Agents of APC, the ruling party in the state, were seen inducing voters with cash and online transfer in Oye-Ekiti, Ado-Ekiti and Emure LGA, The ICIR reported.

Similarly, media observers from different local governments in the state, in a statement, collectively decried the alarming rate of vote-buying during the governorship election in the state.

The claim by Bunmi Bello that there was nothing like vote-buying in the 2022 Ekiti governorship election is FALSE; media reports confirmed that there were cases of voters’ inducement during the poll.

Ekiti Decides 2022: How true is the claim that ADP candidate stepped down for Segun Oni?