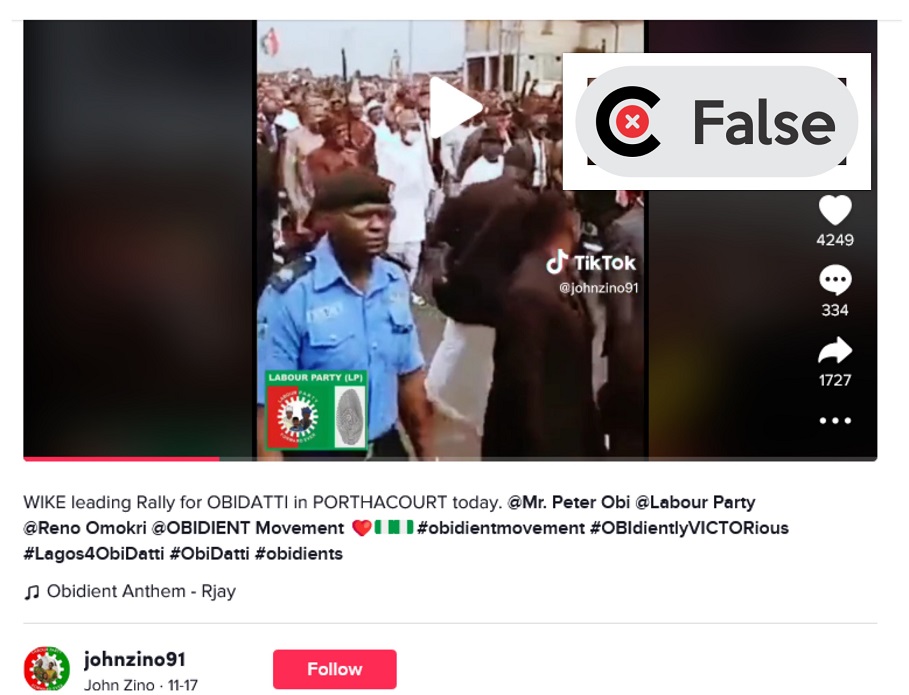 Screenshot of the TikTok video post with the false narrative.

A video has circulated online with the claim that it shows moments Rivers State Governor Nyesome Wike was leading a campaign rally for the 2023 presidential candidate of the Labour Party (LP), Peter Obi.

The footage, now circulating on WhatsApp, shows Obi and Wike walking amid a large crowd, with the campaign song of LP playing in the background.

The clip shows the Labour Party’s logo with a voice-over saying, “My people, see Wike leading rally in Port Harcourt for Obi… Can you beat this? See Wike raising up his walking stick.”

The video, which has been archived here, was traced to John Zino (with the username @johnzino91), one of the party’s loyalist. It was posted on TikTok on November 17, 2022 with a caption that reads: “Wike leading rally for OBIDATTI in PORTHACOURT today.”

The post has since garnered over 4,000 likes, more than 300 comments and 1,700 shares as of Friday, December 23, when it was retrieved from TikTok.

The viral video was traced to the TikTok post made on Thursday, November 17, 2022, the same day Peter Obi and his running mate, Datti Baba-Ahmed visited Port Harcourt to commission a project for the Rivers State Governor, Nyesome Wike, who is a member of the Peoples Democratic Party (PDP).

Wike had in November invited Obi to the state capital for the commissioning of the 9th flyover by his administration.

Checks revealed that the viral video show the moment the former governor of Anambra state alongside his running mate was received by a large crowd of his supporters at the venue of the Nkpolu – Oroworukwo flyover inauguration.

A footage of their arrival at the event’s venue uploaded on YouTube by TVC News Nigeria shows people with PDP flags at the venue of the project inauguration.

Channels Television and other media platforms also reported the event.

My team and I just arrived at the Government House in Port Harcourt, Rivers State, for the Commissioning of a new Flyover constructed by HE @GovWike. -PO pic.twitter.com/u3tI1h6reG

That was not the first time Governor Wike would invite a member of an opposition party for project commissioning in Rivers State.

He had earlier invited the current Nigeria’s Vice President, Yemi Osinbajo, Speaker of the Federal House of Representatives, Femi Gbajabiamila, and a former Edo state governor, Adams Oshiomole, who were all members of the All Progressives Congress (APC) to commission some of the projects executed by his administration.

The claim that the video shows Governor Wike of the PDP leading a campaign rally for Peter Obi of the Labour Party is FALSE; as the footage shows the moment Wike received Obi and his running mate for the commissioning of a flyover project in Port Harcourt.