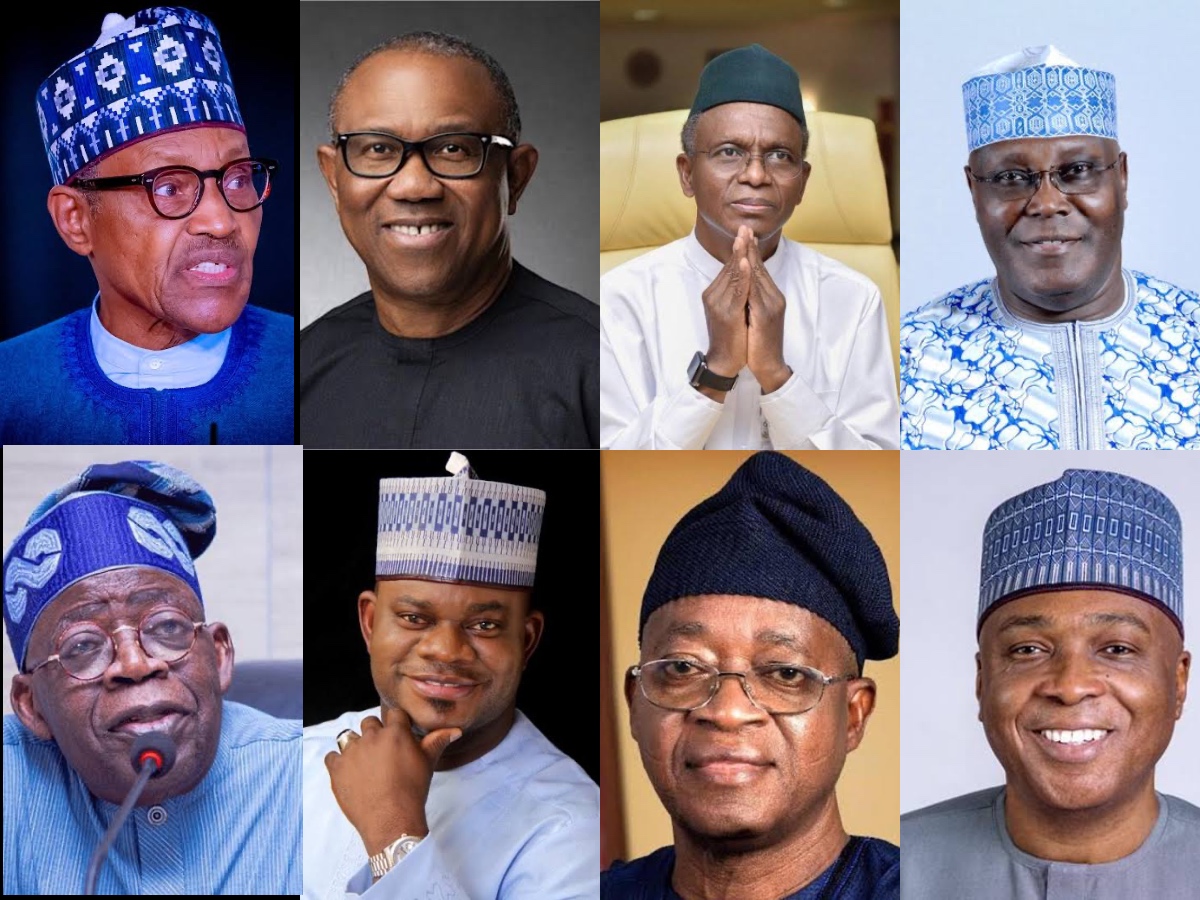 Photo collage of prominent Nigerian politicians fact-checked by The FactCheckHub in 2022.

2022 has been a tortuous year filled with several forms of inaccurate and misleading claims from politicians and most especially candidates for Nigeria’s 2023 general elections.

Whenever they make claims worth fact-checking in the course of the year, The FactCheckHub helps the public to examine their veracity and disseminates our findings to the public via our website and various social media platforms.

Unlike previous years, most of our fact-checks this year are political related. This is due to the forthcoming elections which have been overwhelmed by false information from politicians and their supporters.

In this analysis, we take a recap of some of the most prominent politicians that we fact-checked in 2022.

Nigeria’s President Muhammadu Buhari is the first on this  list. He initially assumed office as a duly elected democratic president of the West Africa nation on May 29, 2015.

Buhari, in response to Bloomberg’s questions published on June 21, 2022, claimed that his administration will be leaving Nigeria “in a far better place than he found it.”

An appraisal of Buhari’s administration in the aspects of security, economy, corruption index and other key sectors published by The ICIR, show that the president’s claim lacks credibility.

Earlier on Sunday, 12th of June, 2022, in commemoration of this year’s Democracy Day, President Buhari claimed that the primary elections conducted by political parties in the country for the 2023 general elections were peaceful and orderly. But a fact-check  published by The FactCheckHub shows that the claim is MOSTLY FALSE.

One of the earliest claims fact-checked by The FactCheckHub this year was a claim by the former Nigerian Senate President, Abubakar Bukola Saraki.

Saraki, who was a contestant in the primary election of the Peoples Democratic Party (PDP), had via his verified Facebook page made claims about the statistics of the voting population in Nigeria.

To examine the veracity of this, The FactCheckHub sent a freedom of information request to the Independent National Electoral Commission (INEC), the nation’s electoral umpire. According to the data obtained, both claims were FALSE as at the time.

Yahaya Bello, the current Kogi State Governor,  was also one of the leading Nigerian politicians caught sharing misinformation in 2022.

Speaking on the 7th of June, 2022, while canvassing for delegates’ support at the All Progressives Congress (APC) convention held in Abuja, Bello claimed that there has been no strike action in the state-owned tertiary institutions since he became the governor in 2016.

The FactCheckHub subjected the claim to verification and outlined various instances where the lecturers in the state-owned institutions embarked on industrial actions.

Speaking on Arise TV on July 22, 2022, the PDP presidential candidate, Atiku Abubakar, claimed that 90 per cent of Nigerians from the Northern part of the country are not on social media.

When his claim was checked using data from National Bureau of Statistics (NBS) on “Telecoms Data: Active Voice and Internet per State”and datareportal, our analysis casts a doubt on the accuracy of Abubakar’s claim.

Meanwhile, Abubakar made two claims at the Arise News presidential town hall, which were found to be TRUE.

He said that Nigeria’s poverty rate when PDP was in government was not as high as it is under the present administration.

The PDP flagbearer also claimed that agriculture is the highest employer of labour in Nigeria.

READ ALSO: Five false claims made by Atiku in the last two years

The presidential candidate of Labour Party in next year’s election, Peter Obi, has often come under the radar of fact-checkers across the country especially since he emerged the party’s presidential flagbearer in May, 2022; partly because of his penchant for quoting statistics.

According to our recent analysis, at least ten of the claims he made in the year under review were checked to be TRUE. This is the highest compared to other presidential candidates that have been fact-checked by this medium in 2022.

However, there are instances where his claims were found to be FALSE. For instance, while speaking at an event in Umuahia, Abia State capital on Saturday, 23rd of July, 2022, Obi claimed that Nigeria’s total export was less than 30 billion US dollars in 2021.

When The FactCheckHub checked the claim using data from National Bureau of Statistics, the results show that Nigeria’s total exports was 18.9 trillion Nigeria naira which is about $47 billion (U.S. dollars) based on the average exchange rate in 2021 – 403.5 naira per dollar. The result from the calculation show higher figure than the $30 billion (dollars) that Obi claimed.

A former Lagos State governor, Bola Ahmed Tinubu, of the ruling All Progressives Congress (APC) was also among the top politicians fact-checked in 2022 by this medium. He is also the party’s presidential flagbearer for the 2023 election.

Earlier this year while speaking to members of the APC in January 2022, Tinubu claimed that the Permanent Voter’s Cards (PVCs) issued by the Independent National Electoral Commission (INEC) had expired.

He told the party’s members who visited him in Abuja that they needed to register for a new PVC as he claimed the ones with them had expired.

When the claim was fact-checked, the result shows that the claim is FALSE, as a permanent voter’s card doesn’t carry an expiry date.

Tinubu also claimed that he brought a leading mobile telecommunications company, Econet, now Airtel to Nigeria. The claim was also checked by The FactCheckHub and it was found to be FALSE.

The current governor of Kaduna State, Nasir El-Rufai, also made this list.

El-Rufai, while speaking as one of the surrogates who accompanied Tinubu to the Chatham House in the United Kingdom on December, 5, 2022, made several claims on Nigeria’s security situation.

Similarly, the former governor of Osun State, Gboyega Oyetola, made the list due to his claims at the governorship debate organised by Channels TV in July, 2022.

Oyetola, while speaking on his achievements as the governor of the state, claimed that the state had not experienced any serious case of banditry, armed robbery, and kidnapping since he assumed office as the governor in 2018.

The FactCheckHub checked the claim using data from the Nigeria Security Tracker and identified several cases of the banditry, armed robbery and kidnapping recorded in the state under his watch. His claims were found to be MOSTLY FALSE.