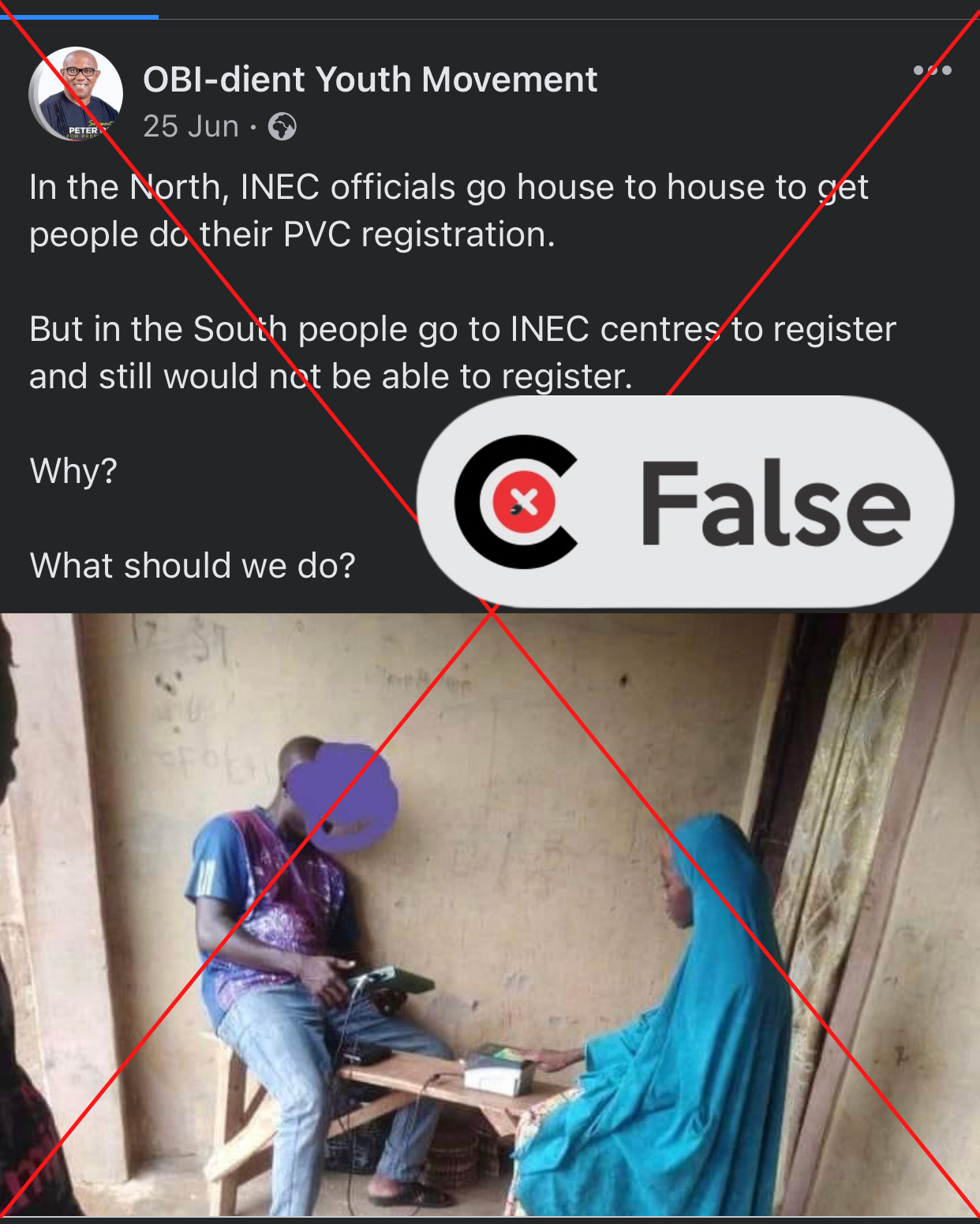 A screenshot of one of the viral posts on Facebook.
Reading Time: 3 minutes

A VIRAL photo of a woman who appears to be undergoing biometric capturing in front of her residence has surfaced online with a claim that it shows an official of the Independent National Electoral Commission (INEC) conducting voter’s registration for the woman.

The photo is circulating following allegations on social media that the INEC is conducting house-to-house voter’s registration for citizens in Nigeria’s Northern region unlike what’s obtainable in other parts of the country where citizens jostle for registration at INEC approved centres only.

A Facebook page, @Obi-dient Youth Movement posted the claim with a caption that reads:

“In the North, INEC officials go house to house to get people do their PVC registration. But in the South people go to INEC centres to register and still would not be able to register.Why? What should we do?”

Another Facebook page, Peter Obi for President (PFP) also posted the claim with a similar caption.

Furthermore, another Facebook user, Odince posted the claim with a caption thus:

“PVC saga: Inec goes house to house of indigenous northerners to register them for PVC. But in the south, no sufficient machines to register for PVC. Hmm.”

“PVC is done from house to house in the North. I wish they can extend this privilege to other part of the country.  God eppp us all.”

When The FactCheckHub subjected the image to multiple reverse image search, the results show that the photo did not originate from any credible media platform.

Also, using some keywords on Google search engine, the result shows that no credible media platform reported that the INEC conducted or is conducting house to house voter’s registration in any part of the country.

When contacted by The FactCheckHub, the Chief Press Secretary to the INEC chairman, Rotimi Oyekanmi clarified that the claim is false.

“The Independent National Electoral Commission has an official method of making Permanent Voter Cards (PVCs) available for collection by their owners, also referred to as registered voters.

“Our officials do not and cannot embark on a house-to-house distribution of PVCs. That is against our official policy,” Oyekanmi said.

“The standard practice is that, voters go to the INEC local government office covering the area where they registered to physically collect their PVCs. And before doing so, they are expected to sign or thumbprint on our designated forms for record purposes.”

He also clarified that the viral photo should be ignored as it has nothing to do with the voter’s registration for the 2023 general election.

The claim that INEC is conducting house-to-house voter’s registration in Northern Nigeria is FALSE; as the INEC debunked the claim while further findings show that no credible media platform reported such exercise.