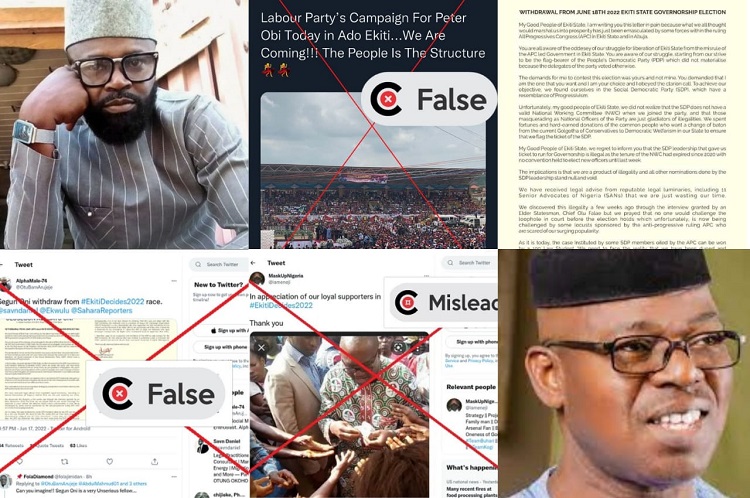 EKITI State governorship election was held on June 18 after several weeks of preparations with sixteen contestants.

It was another opportunity for Ekiti residents and indigenes to elect their next administrator, who would pilot the affairs of the state for another four years once the incumbent Governor, Kayode Fayemi, leaves office.

Though now concluded, it may be recorded as one of the most peaceful elections in the history of the country. It was primarily tagged peaceful and fair even by most of the electorate, including the candidates.

There were three front-runner contestants –  the Peoples Democratic Party (PDP), Bisi Kolawole, the All Progressives Congress candidate, Biodun Oyebanji and the former governor of the state who joined the race under the platform of the Social Democratic Party (SDP), Segun Oni.

Reports say over 900 000 voters registered for the Permanent Voters Card (PVC) to partake in the poll, but less than 800 000 voters picked their PVCs, and an even less number voted.

But INEC’s Returning Officer, Kayode Adebowale, who declared Oyebanji of the APC as the overall winner, announced the total valid votes at 351,865 from 363 438 accredited voters.

Even though voters’ turn-out appeared good, it was still relatively low at 36 per cent when compared with the figure of registered voters.

The spread of misinformation was a major turn-off. This mainly characterised the poll. Also were credibility concerns due to reported cases of vote-buying and pockets of violence.

Nevertheless, observations by the FactCheckHub revealed spin doctors and fake news purveyors took advantage of the poll to share misleading information in favour of their favourite candidates. This was at the expense of other flag bearers.

Social media platforms became the driving tool during the poll. Some of the controversial claims are, however, highlighted below.

Segun Oni withdrawing from the poll

A Twitter account holder identified as AlphaMale-74 @OtuBamArujeje shared the claim in a two-page document.  It was allegedly written and signed by Oni Friday, June 17, 2022.

Besides, another version of the letter surfaced on social media. It was shared by one Kola Oluwole @babakay048. Although this was not dated, it was signed. Comparative analyses of the letter would late reveal both letters had different signatures attributed to Oni. The letters drew reactions from the public.

Tony @Tonyeleme, for instance, criticised the former governor describing him as unserious and unprepared.

Fola Diamond @Folajimidan, in his reaction, labelled Oni as “…a very unserious fellow.”

Yunuss @agyunuss swiftly drew on the post to share a personal experience of how he lost the chairmanship of the student association while in school, despite being a popular candidate because his opponent allegedly fabricated the story of his withdrawal, just as in the case of Oni.

Rebuttal for him was too late. With this, he felt the SDP candidate might find himself in a similar condition.

These, among others, were mixed feelings that followed the viral misinformation.

However, the claim against Oni eventually turned out false. Based on findings, Oni never wrote any letter accepting defeat to support a candidate from his former political party. It was an evening prior to the election day; hence, publicly disregarding the claim became inevitable.

“I believe it shows the spirit of panic,” he stated in his reaction. “I have not caught a deal with anybody. Number one cannot withdraw. Who will he withdraw for? Two or three?” he queried.

‘I am still in the race. I’ve not withdrawn. My positive street approval ratings have stoked fears in my opponents.’

Ekiti state, SDP Governorship Candidate, Segun Oni dismissing rumours of his purported withdrawal and insisting that he is the frontrunner and the man to beat. pic.twitter.com/9N52MKy4Kf

These excluded reports from other credible media organisations that reported the rebuttal. It was fact-checked here by The FactCheckHub.

Similar to the case of Oni is that of the candidate of the Action Democratic Party (ADP), Kemi Elebute-Halle.

Claims circulated that the female candidate has ended her ambition to support the SDP candidate during the election.

The claim was mainly shared on Facebook with remarks from people criticising how she could have taken such a decision even though she wasn’t a front-runner candidate. But the 40-year-old candidate was quick to debunk the viral claim.

She tweeted, denying the claim. She never stepped down for anyone. “I’m still in the Governorship race, debunk every contrary news.” Again, the false claim would no doubt affect her already slim chances due to the gender bias and relatively unpopular party through which she contested.

The Head of Fact-Checking Desk at Daily Trust Newspaper, Phillip Clement, believed misinformation, to an extent, could influence the general outcome of the just concluded election. “This is further engineered with the proliferation of the social media where people post whatever they wish to, and within the twinkle of an eye, it has gone viral.”

He made reference to the viral letter on social media alleging Oni’s withdrawal. The same thing goes for the candidate of the ADP, Elebute-Halle saying she stepped aside for Oni.

“Both stories turned out to be false.”

“Consequently, the misinformation at that time could have changed the mind of voters completely and had a significant impact on the elections as the supporters of both candidates could have easily diverted their votes.”

From Egypt to Ekiti, false claim about Peter Obi surfaces during poll

In the heat of the election, a suspected photograph of the Labour Party (LP) presidential candidate, Peter Obi, went viral on the internet. The photograph depicted Obi campaigning to a mammoth crowd in Ekiti.

“Labour Party’s Campaign For Peter Obi Today in Ado Ekiti…We Are Coming!!! The People Is The Structure,” it tweeted.

However, verification would later reveal the photograph as that of the presidential candidate of the APC, Bola Tinubu, during his recent campaign to Ekiti state prior to the guber election date.

In another viral photograph shared by Twitter handle MaskUpNigeia @iamneji, he wrongly depicted Obi distributing money to people in Ekiti state. It was also retweeted here.

“In appreciation of our loyal supporters in EkitiDecides2022.”

But, as usual, it turned out to be a 2017 photograph not related to the 2022 Ekiti state election.

The Senior Special Assistant to the Ekiti State Governor Wunmi Bello claimed there was no vote-buying around the Ido-Osi Local Government Area of the state and other parts of Ekiti during the governorship election.

She was responding to questions raised by the Arise Correspondent over Oni’s take that there were reported cases of vote-buying in Ado-Ekiti, the state capital, and a few others.

But on the contrary, several voting-buying incidents were reported across different polling units during the poll.

Field reportage by The ICIR and other media reports alluded to the case of voters’ inducement. This was a misrepresentation of facts put forward by the governor’s aide, hence fact-checked.

Implications of sharing misinformation during elections

False narration spread during a campaign process, especially during an election, could influence voters’ decisions. The last election in Ekiti was not an exception.

It has, therefore, become a reoccurrence during major elections in the country.

It was recorded during the Edo state governorship, the Anambra state election, and Bayelsa, including the  2019 presidential election.

These, however, point to the likelihood of having more misinformation shared in next year’s 2023 general election, except proactive action is taken by media houses and other relevant stakeholders.

An instance of a party candidate supposedly stepping down for the other could have only implied one thing – the opposition candidate getting more votes than usual.

Though a Fact-Checker and Head of Investigations at the Humangle, Kunle Adebajo, believed several factors could come to play for voters to decide who to cast their ballot, the kind of information at their disposal is critical to their voting decision. Hence, the need for live fact-checking.

“However, inflammatory, misleading, and inaccurate information can lead to increased levels of voter apathy or the electorate voting based on emotional sentiments and imagined dangers, rather than what’s truly best for them,” he added.

Adebajo identified the need to improve fact-checking infrastructure across news platforms while politicians are made more accountable to address the spread of misinformation. With this, they could avoid being embarrassed by reports proving they made misleading or unverified information.

“This is the time for news outlets that do not have independent fact-check desks to start setting them up and equipping their reporters with the skills necessary to match the task ahead. Live fact-checks of debates should become the norm.

“Constant tracking of misinformation on the day of election should also be done to prevent the breakdown of law and order or other negative consequences that’ll compromise the credibility of the polls. Fact-checkers should be studying party manifestos and questioning the achievements flaunted by incumbent politicians to keep the public well-informed. They should also continue to educate their readers about how to identify possible misinformation themselves, so they don’t necessarily depend on published fact-checks to approach suspicious claims with caution and a critical mind.”

In holding politicians accountable to curb the spread of fake news, Clement proposed the media should beam their searchlights more on public statements made by the politicians, as in most cases, there could be loopholes or gaps in statistics or pronouncements made.

Ahead of the 2023 elections, Fact-checkers were advised to be more proactive and deploy different verification tools to carry out their duties.

“We need more fact Checkers to keep misinformation in check ahead of the 2023 Elections.”