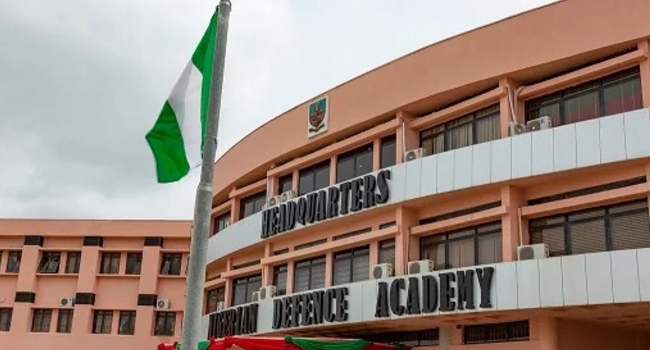 A viral video, on Tuesday, August 24, 2021, emerged on social media shortly after local media reported news of the bandits’ attack on the Nigerian Defence Academy (NDA) in Afaka, Kaduna State.

The one-minute 49-second video shows turbanned armed men on motorcycles, speaking a yet-to-be-identified language. However, the poster claimed that they were the bandits who attacked NDA, Kaduna.

In the video, the bandits appeared to have emerged from the forest as the entire vicinity was full of trees, with a narrow path. But, the footage has been circulated widely, especially on WhatsApp.

Following the incident, the NDA and the Nigerian Defence Spokesperson confirmed the incidents of the bandits’ attack. They disclosed that the attackers were able to breach the perimeter fencing of the residential area of the NDA where two officers were killed and one other abducted.

“The security architecture of the Nigerian Defence Academy was compromised early this morning by unknown gunmen who gained access into the residential area within the Academy in Afaka. During the unfortunate incident, we lost two personnel and one was abducted,” a statement issued by Bashir Muh’d Jajira, the academy’s spokesperson said, stressing that the incident occurred early in the morning.

The Nigerian Defence spokesperson Benjamin Sawyer put the time of the incident at 02:15 am.

Sawyer’s timing aligned with the initial report by Daily Trust, where an officer narrated his experience to the medium, saying “the bandits took advantage of the time when most people had gone to bed…”

Usually, 02:15 am was not daybreak, thus it would be dark by then. Conversely, the circulating video was well lit implying the attack was carried out in the day.

Sawyer was asked to validate the viral video. But he said in his reaction “this video (the claim) is of the daytime and could have been anywhere,” he told The FactCheckHub when the footage was shared with him.

“The attack happened in the night at about 02:15 am,” he emphasised.

Further analysis of the footage reveals that there were neither landmarks and structures nor notable buildings and infrastructure to establish the exact location.

A Google Reverse Image search of keyframes (images) taken from the footage using the InVid video verification platform shows that the images were not available online as of 18:00 GMT on Tuesday evening. Other reverse image tools including TinEye, Yandex and Bing deployed for the same purpose also yielded no result.

Using InVid for forensic analysis of the visual shows that the images are nowhere to be found online; thus, it is likely a fresh video that has not been uploaded to the internet yet.

The FactCheckHub could not independently verify the source of the video as it has been forwarded severally in WhatsApp groups.

However, the use of the Google Earth tool to identify the NDA premises in comparison with the footage shows a contradicting live image as there are multiple structures within the NDA.