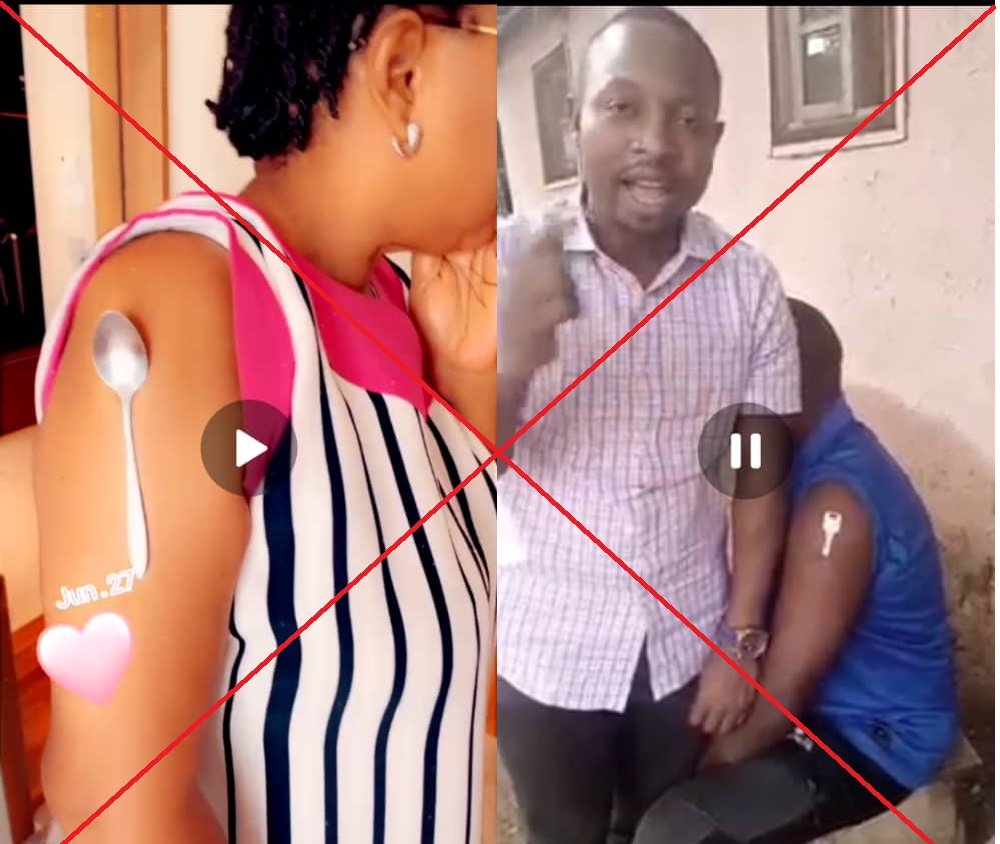 Multiple claims around COVID-19 vaccinations have emerged since the World Health Organisation (WHO) approved some vaccines for it prevention, one of such claims circulating in Nigeria is that the vaccine comprises of electromagnetic elements that could make metallic objects stick to the arm – vaccination spot on the body.

The FactCheckHub observed that two of such videos – done in English and Hausa Language – it received for verification were largely circulating on the WhatsApp messaging platform.

Findings by The FactCheckHub show that the claims are false.

The first, a footage with a June 27 timestamp, showed a spoon stuck to a woman’s arm.

“This thing is true,” a female narrator said in the video. “My friend took the COVID-19 vaccine and we just experiment[ed] right now to see if what people are saying is true. Look, this is a spoon and it stuck.”

In the 30 seconds clip, the narrator urged people not to take the vaccine.

A similar scenario was replicated in the second clip. However this time around the narrator, speaking in Hausa language who was shown in the video was male and the purported experiment was conducted with a key.

He said they had heard via social media that after getting the COVID-19 vaccine, the recipient’s body becomes magnetic – attracts metal, but they were doubtful until a friend of theirs took the injection. He claimed they heard on social media  the vaccine is a magnetic chip implant.

This almost two-minute video alongside the the first have been in circulation at least from June.

The Nigeria’s National Primary Health Care Development Agency (NPHCDA), an establishment under the Federal Ministry of Health has been responsible for vaccination in the country. Prior to the pandemic, the agency has been at the forefront of distributing oral polio vaccines, and several others usually in partnership with the state ministry of health.

As of June 26, more than 2.2 million Nigerians were vaccinated with first dose of the AstraZeneca vaccine. From the figure, 1.1 million Nigerians who took the first dose had taken their second dose. The agency has not reported any case of recipients arm becoming magnetic after getting COVID-19 vaccination.

In addition, the agency explicitly debunked the viral claims describing them as fake news.

The NPHCDA Director-General Faisal Shuaib said it’s a COVID-19 conspiracy that should be discarded.

Shuaib told the press that  “The anti-vaccination elements have come up with magnetic conspiracy, in which they claim, and are deceiving people with a video that COVID-19 vaccine creates a magnetic field around vaccination site and can cause the body to light up an electric bulb.

As ridiculous as this and other conspiracy theories are, vulnerable people, believe them and are, therefore, continuing to take the risk of avoiding COVID-19 vaccination”.

He added that “Although the people who are manufacturing conspiracy theories about COVID-19 are in the minority, the virulence of the social media increases their reach.”

The doctor explained that wet, moist, strong friction or sticky skin can make objects stuck to the skin especially in smooth areas.

Shuaib added that the typical dose was not large enough to contain a magnet, and that a magnet that could fit in a needle would not be powerful enough to attract anything.

“There are no ingredients in the AstraZeneca vaccines or any other COVID-19 vaccines that make people exhibit magnetic properties after being vaccinated for COVID-19.

“Scientifically, the claim does not make sense,” he explained

The composition of the AstraZeneca vaccine use in Nigeria can be seen here.

Other sources fault the claims

A Public Health Expert with over a decade of experience Felix Obi also faulted the claim. He said there are no empirical studies to validate the claim and the assertion also betrays normal logic based on simple physics.

He added that he has not “seen any study or scholarly paper that identified that [electromagnetic effect] as a possibility”.

“So far, it does not work that way. There is no scientific evidence to support it. At least I have taken the two vaccine [doses] and I did not experience anything of such.”

As for him, those pockets of assertions should be discarded.

In May 2021, Reuters debunked a similar claim. The report noted that physics and medical experts have said vaccines for COVID-19 do not contain ingredients that could produce an electromagnetic field at the site of injection.