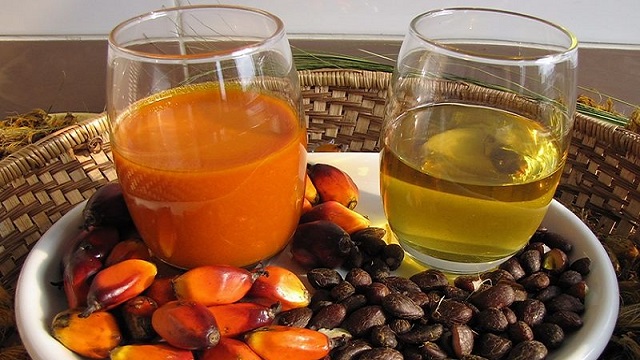 Palm Oils made from outer pulp and kernel of the African Oil Palm respectively. Photo by T.K. Naliaka

A message shared on WhatsApp as seen on Friday, January 15, 2021 says experts have confirmed that consumption of palm oil can  help curb the spread of Coronavirus (COVID-19).

The claim was attributed to the World Health Organisation (WHO).

It specifically claimed that drinking two spoonful of palm oil every morning would help curb the spread of the virus.

WHO says consumption of palm oil can curb the spread of COVID-19.

A screenshot of a claim circulated online that WHO says consumption of palm oil can help stop the spread of coronavirus.

The COVID-19 is a pandemic.

On December 31, 2019, the WHO Country Office in China became aware of the ‘viral pneumonia’ in Wuhan city. The Wuhan Municipal Health Commission issued a media statement on the disease outbreak.

On October 22, 2020, the United States Food and Drug Administration announced approval of an antiviral drug Veklury – remdesivir. The drug is the first vaccine for COVID-19 treatment to receive the FDA approval.

By December 31, 2020, the WHO listed Pfizer/BioNTech vaccine as first emergency use for the virus.

“This is a very positive step towards ensuring global access to COVID-19 vaccines. But I want to emphasize the need for an even greater global effort to achieve enough vaccine supply to meet the needs of priority populations everywhere,” Dr. Mariangela Simao, WHO Assistant Director General for Access to Medicines and Health Products stated.

In addition, the manner at which the message was constructed also defies WHO’s communication pattern.

Charity Warigon, Head of Communication, WHO Nigeria, dismissed the message and distanced the WHO from it.

“This is definitely not a WHO recommendation,” she told The FactCheckHub via a text message.

“In fact, for someone who is coughing, it could be dangerous as they could inhale oil which would be worse off.”

She queried if the claim was ever supported by any data.

“WHO will not make a recommendation without backing it by evidence,” Warigon adds.

“No, not true. Another fake news,” she said.

This will not be the first time that a message will be falsely attributed to WHO.

The FactCheckHub had previously debunked a claim that said WHO shared ‘7 biggest brain-damaging habits’.

Based on the above findings, the claim is FALSE.

WHO did not send out the message circulating on WhatsApp which recommends that drinking two spoonful of palm oil can curb the spread of COVID-19.

In addition, there is no evidence to back the claim that drinking two spoonful of palm oil can curb the spread of COVID-19; on the contrary, it might aggravate a situation where a person is coughing.

Claim that Anambra's debt profile is over N200 billion is FALSE