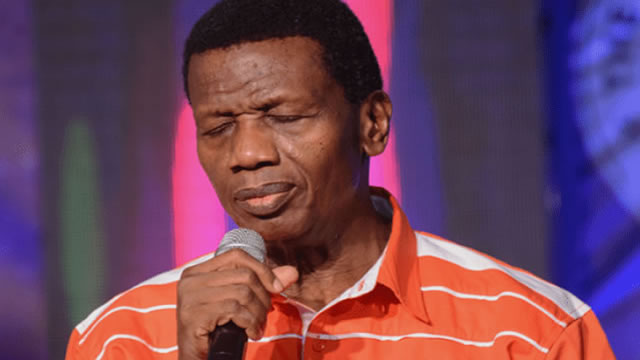 On June 11, 2020, a popular entertainment news blog known as weddingdigestnaija.com reported that Pastor Enoch Adeboye, General-Overseer of the Redeemed Christian Church of God (RCCG) allegedly threatened to kill anyone that ‘messes’ with his wife, Folu Adeboye.

The report, which was also published by other online news platforms, claimed that the strict warning was issued to the general public during the clergy’s virtual morning devotion last week. It was posted on the clergy’s verified Instagram account: @PastorEAAdeboyeOfficial with the topic: Joys of Having a Successful Marriage.

“You have heard me say it before. You can do whatever you like to me, you can criticize me, you can insult me, you can trample on me, I will only pray for you. But if you mess around with my wife, I will kill you,” the report stated, quoting Adeboye.

“I will kill you so thoroughly you won’t even be able to rise on the resurrection morning. When some people ask how are you going to do that, I tell my daddy to send you to hell straight away, so that there will be no need to come forward for judgement.”

The ICIR’s findings revealed that the video footage is real and the comment true, as it was also posted on the verified Instagram page of the clergy named @pastoreaadeboyeofficial on 4th June, 2020.

In the sermon, the clergy spoke on how couples could enjoy a successful marriage based on Biblical teachings. He established some of these teachings with different Biblical passages including Ephesians 5: 20-30.

For instance, while he encouraged women to submit to their husbands irrespective of the academic qualifications and status, he tasked men to love their wives, just as Christ loves the church.

Based on the context of the teaching, the two adults he identified are man and woman. But on the claim to kill anyone that ‘mess’ with his wife, Adeboye emphasised that a man should love his wife to the extent that he could give his life for hers.

“The only big problem comes when you asked the question, how much love must I have for my wife? And the Bible made it clear, as Christ loves the church. That is a big one because it means you have to love your wife to the extent of being willing to die for her,” he stated in the 36 minutes and 34 seconds footage.

Pastor E A Adeboye morning devotion. A post shared by PastorEAAdeboye (@pastoreaadeboyeofficial) on Jun 4, 2020 at 12:16am PDT

The influential clergy particularly stressed that he would not shoot the person, as the government could only arrest him if he uses any lethal weapon. However, he said his divine power would come against such an individual.

“…who told you I’m going to shoot the fellow? You can only arrest me if I use any human weapon. To mess around with my wife, then every power God has given me will descend on you.”

“Why? Because the Bible says you are to love your wife as Christ loves the church that he gave himself for man,” he said, describing the act of love as an assignment of every husband in marriage.

Adeboye insisted further that husbands should develop such love for their wives only. He buttressed the teachings in Yoruba language, after citing examples including that of two couples who were both Professors.

“Husbands will forever be husbands, but you, the husband must love your wife. That should not be difficult until the Bible added that as Jesus loves the church….”

“That made it a bit difficult because it implies that you must be ready to die for your wife,” he stated.

Further findings revealed that the clergy disassociated himself from the actual killing but would rely on divine help.

Though the claim that Adeboye threatened to kill anyone who messes with his wife is TRUE, the short footage was taken out of context, to MISLEAD members of the public.

Has Buhari government recovered all local councils taken over by Boko Haram in Borno, Yobe, Adamawa?

Did a Nigerian invent machine that transforms nylons, plastics into petrol?