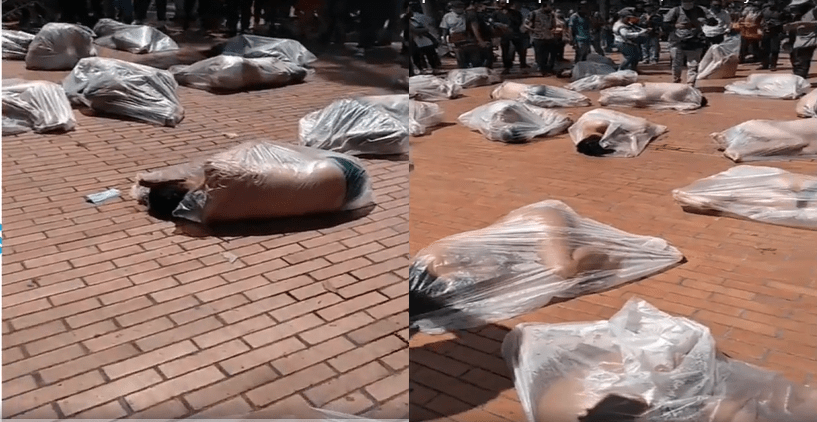 A video of people wrapped in plastic bags spread on the floor has been shared multiple times on WhatsApp in Nigeria with the claim that they are Christians being maltreated in Afghanistan.

The last batch of U.S.  and allied forces in August 2021 withdrew from Afghanistan, which led to the take-over of the government by the Taliban thereby ushering in Islamic rule in the Central Asian nation.

The video shows Christians wrapped in plastic bags in Afghanistan.

Findings show that the sixty-two seconds video which was sent to the FactCheckHub for verification on September 8 2021 is FALSE, as the footage is from a protest in Colombia, and not Christians in Afghanistan.

Using the WeVerify image verification and Google Reverse Image tools, the video was traced to a Facebook post published on May 26, 2021.

The video which was longer, 11 minutes and 46 seconds, was a live coverage of a protest.

It indicated that the footage was a protest to demonstrate against the government at the park located in Medellin city in Colombia.

An additional caption translated using Google Translate puts the demonstration as a “tribute to respect people who died in the course of fighting for their rights.”

“A tribute to the people who have been found dead in recent days, drowned, in pieces and in bags. In honour of all those who left their homes to fight for their rights and could not return home,” it read.

The protest was also reported by international media and local media.

Furthermore, the video was already online before the Taliban’s took over power in Afghanistan in mid-August 2021.

Earlier on, the video had also been shared in Indonesia as victims of coronavirus; It was however debunked here and here.

Nigeria is prone to religious and ethnic crises, reports the African Centre for the Constructive Resolution of Disputes (ACCORD). Therefore, alluding that the video shows Christians being maltreated by the predominantly Islamic government of Afghanistan can spark such embers.

The footage has nothing to do with Afghanistan or Christians being maltreated. It was a demonstration against the Colombian government. Thus, the claim is FALSE.