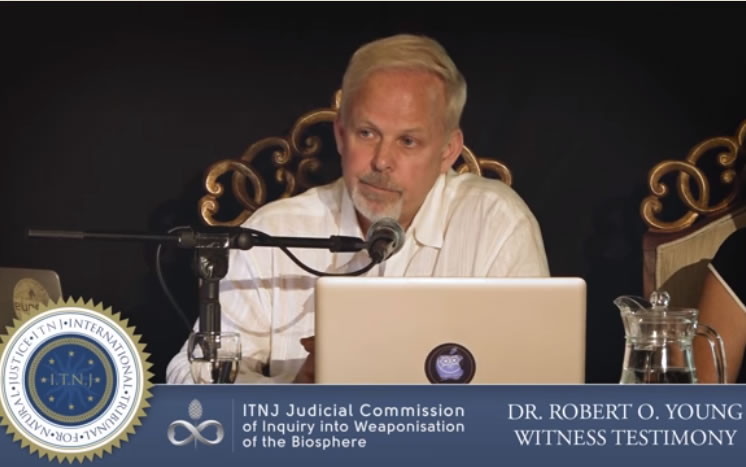 A frame shot from the viral video.
Reading Time: 3 minutes

A video claiming that computer magnate, Bill Gates said that the world should be depopulated starting from the elimination of Africans has resurfaced online and gone viral.

The claim was made by Robert Young, an alternative medicine practitioner.

The video was shared  on Twitter by Femi Fani-Kayode, a former Minister of Aviation in Nigeria.

He shared it with the caption:

Africa O Africa! Listen to this, watch your back and pray hard…

Bill Gates said the world should be depopulated by three billion people, starting with the elimination of Africans.

Did Dr. Young made this assertion or is it a doctored footage?

Findings by the FactCheckHub show that the video originated from International Tribunal for Natural Justice (ITNJ), a radical group that holds unsanctioned commissions of inquiry.

Through  WeVerify, the 40 seconds clip shared by Fani-Kayode was split into frames; while these frames were used in a Google Reverse Image search.

The clip is part of over an hour long video shared by the ITNJ in 2019.

Young made the assertions before the ITNJ Judicial Commission of Inquiry on Weaponisation of the Biosphere.

Young made the controversial comment when responding to a question from Stone, one of the panelists on if synthetic molecule could be used for human treatment.

He said in part:

For the purpose of sterilisation and population control, there are too many people on the planet that we need to get rid of. In words of Bill Gates, at least 3 billion people need to die. So, we will just start off in Africa.

We start doing our researches there, eliminates most of the Africans because they are deplorable, they are worthless, they are not part of this world economy, so they have their rights taken away, they are suppressed and they are experimented.

Did Gates call for world depopulation by three billion people, starting with the elimination of Africans?

A search on the internet did not produce any result of Gates making the assertion.

Young had said “These are Bill Gates words. Just Google Bill Gates and depopulation and sterilisation. You’ll hear out of his own mouth the plan”.

Gates has been the subject of misinformation and conspiracy theories especially in areas of health, COVID-19 vaccine, population control and 5G network.

This is likely due to his work in Public Health. He has long been a proponent of population control to target the roots of poverty and unrest with a focus on contraception.

On COVID-19, Gates shared concern on the possible rate of transmission due to existing medical issues, weak health facilities, testing capacity among others.

“Poor countries may not be able to reduce the rate of spread unlike the rich countries,” – he told CNBC News in an interview.

In another interview with the Financial Times,  Gates expressed optimism that the COVID-19 vaccine maybe made  available to everyone globally.

Several claims on Gates linked with depopulation and vaccine have been previously debunked by other fact-checking organisations such Politifact, Snopes, and Reuters.

From the findings above, the claim that Bill Gates said that the world should be depopulated by three billion people, starting with the elimination of Africans is FALSE.