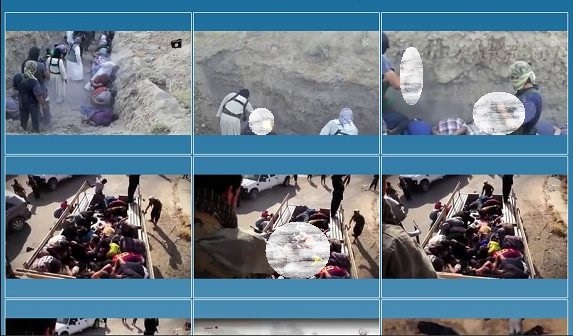 A video showing footage of gruesome killings is being shared in Nigeria on the WhatsApp platform with the claim they are  Christians executed in Afghanistan by the Taliban for not renouncing their faith.

The caption of the video which surfaced amid the Taliban take-over of power in Afghanistan reads;

“Happening now in Afghanistan, renounce Christianity or you are executed openly by the Taliban as you can see above[referring to the video]. The Christian community all over the world should rise up against this inhumanity of man to man.”

The video shows Taliban in Afghanistan killing Christians that did not renounce their faith.

Checks by The FactCheckHub show that  One minute, 36 seconds video in circulation in Nigeria does not show Christians being executed in Afghanistan and therefore false. It is a collage of at least four different clips of incidents which happened at different times.

The FactCheckHub has earlier debunked another video being circulated as Christians wrapped in plastic bags being persecuted in Afghanistan which was actually a video of a protest in Colombia.

The FactCheckHub ran the video through through the WeVerify Image Verification Tool, and discovered the footage were separate videos combined together as one. The first video was traced to September 2016.

AhlulBayt News Agency (ABNA), an Iranian platform which covers treatment of Shia Muslims across the world reported it as the execution of Shiite Muslims by ISIS thugs in Iraq.

It added that video, released on ISIS terrorist channels, was purportedly filmed in Wilayat North Baghdad.

The video which shows the execution of 50 persons  in an already dug mass grave was also reported by the UK MailOnline in September 2016.

However, the reports noted that the incident was from a 2014 incident that will later be labelled as the “Speicher Massacre” which saw an estimated 1700 Shia’s killed close to a Speicher military base. Some reports puts the causality figure at 2000.

A report noted those killed were cadet soldiers mostly Shi’ite military, shot dead in Tikrit, a city in Iraq.

“Young men are seen falling from trucks and pleading for their lives before being lay down in shallow graves and sprayed with bullets”, Daily Mail  reports.

Catholic news which also reported the story did not identify the prisoners as Christians contrary to the claim but Shiite military recruits in Tikrit.

Photograph from the third footage was an extension of the Tikrit massacre.

The third frame was also traced to the same location. It was an extension of the Tikrit massacre which took place in 2014 and surfaced online in 2015.

Two frames from the fourth footage were extracted and traced to July 2014.

The Daily Mail reports that the 36-minute film showed different scenes including that of of dozens of prisoners lying face down on the ground, hands bound behind their backs, waiting to be executed and another scene of  hundreds of men with their hands bound, waiting to be shot or lying dead.

The video was released during an  Eid celebration. In its interpretation of the video, the prisoners were referred to as rafidas. The word rafidas is considered unpleasant used to describe the Shi’ite Islamic sect.

From the findings above the video does not show Christians being massacred in Afghanistan, the claim is FALSE. The clip is a compilation of old videos linked with ISIS.

Are SIM cards made in Nigeria?