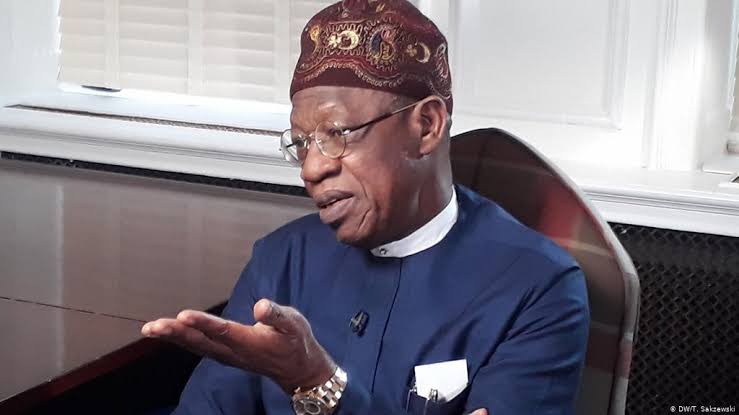 A CLAIM has been shared repeatedly on social media and blogs that the Nigeria’s Minister of Information and Culture, Lai Mohammed has accused the Igbo people of being responsible for the country’s underdevelopment.

On August 18,  an online platform, Ecocitygist  published a variation of the report which states that the minister  said the Igbos, but not the Fulanis were behind the nation’s predicament.

“I want to specifically channel my statement to Igbos in South East. I’m making this statement because it is so clear that they are the ones who will never want to hear anything good about Nigeria but rather will continue to glamor [clamour] for succession [secession]. I think it’s a sign of wickedness to become an enemy to your own country,” part of the report reads.

The minister reportedly made the assertions to journalists after a closed-door meeting with other cabinet members of the current President Muhammadu Buhari led administration.

Similar reports were also carried by  9newsng, Omokoshaban, Eagle Media TV Nigeria as well as Biafra Unite YouTube page which has over 33,000 subscribers.

That Lai Mohammed said the Igbo people are the ones hindering Nigeria’s progress.

A close look at the report shows that it was syndicated across the different blogs most likely by the same person or group, this is because the same errors can be found across the reports on different  platforms. Errors like the use of ‘Glamor’ instead of ‘Clamour’, ‘Succession’ instead of  ‘Secession’  and so on.

Also the report was not published by any mainstream media organisation.  While 9newsng reported the story in such a manner as if the minister granted an interview after the purported meeting with other ministers, Ecocitytvnews presented the report as a press statement.

The report also stated that “Lai Mohammed made these statement after his indoor meetings today in Abuja with other ministers concerning how to build up Nigerian economy” , the use of ‘HIS indoor meeting’ here connotes that the meeting was summoned  or chaired by Mohammed.

This poses a red flag because while peculiar situations may warrant the minister to invite selected members of the cabinet for a meeting, the chances of Mohammed summoning other cabinet members over matters bothering on Nigeria’s economy is almost impossible. This is because President Buhari has a Special Adviser on Economic Matters and there is also a Presidential Economic Advisory Council (PEAC) which Mohammed is not the chairman.

In addition Prof. Yemi Osinbajo, the Vice President chairs the Economic Sustainability Committee (ESC)  set-up due to the impact of the Coronavirus  (COVID-19).

More so,  the Federal Executive Council (FEC) holds regular meetings involving all the cabinet members including Mohammed, where issues of national development and economic matters are discussed. as such a Minister of Information and Culture is unlikely to be chairing or summoning a  meeting over economic matters.

Furthermore, the post on YouTube had no video or audio of Mohammed making the claim, It was mainly a collage of file footage put together over a narration.

The FactCheckHub reached out to Joel Attah, the Chief Press Secretary (CPS) to the Federal Ministry of Information and  Culture to verify the statement attributed to the minister,

“Nothing like that. Everything is fiction,” Attah replied in a phone conversation.

“There was no press statement issued and the minister did not meet with cabinet members. Nothing like that happened,” he reiterated.

A media assistant to  the Minister of Information and Culture, Segun Adeyemi also debunked the claim. He described it as fake news.

Adeyemi said “I can confirm to you that this story never emanated from us. It is the figment of the author’s imagination and a classic example of fake news.”

On August 24,  The FactCheckHub contacted 9newsng.com  via its twitter handle @9newsng to verify source of the claim but no response was gotten as at the time of  this report.

The official behind Igbo Volume, one of the platforms that also published the report was contacted via a United Arab Emirate (UAE) mobile number +971  55 508 6536 that was on their  Facebook page. The call was made 2:13 pm, Lagos, Nigeria time.

He simply asked the reporter to call back in two hours. He said he was at work as of the time he was contacted.

At about 4:14 pm, another call was put to his line but he told the FactCheckHub he was just rounding up from work. He asked the reporter to call back again in one hour, which was done.

At 5:51 pm he responded. He said he just sourced for news from the internet and publish on his Facebook page.

“When we see information online, we just publish it like that,” he responded in a phone interview.

Though, he claimed to have sourced the controversial report from Channels TV, no such story was found on the TV station website.

He was then asked to send the link from the purported Channels TV report. He agreed but he did not send.

Based on the information presented above,  the claim is FALSE.

Did Nigeria lose over 18 million jobs under Buhari's presidency?

Is Nigeria safer than five years ago as claimed by its Army Chief?