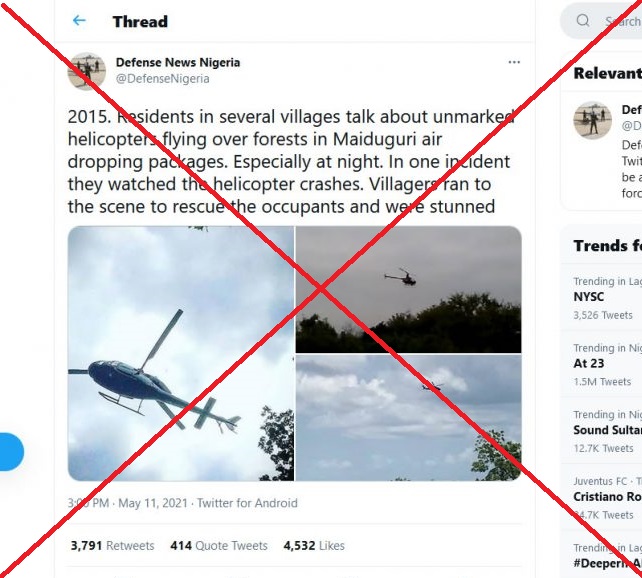 A screenshot of the misleading tweet.
Reading Time: 4 minutes

A  Twitter post shared thousands of times claim three photos of unmarked helicopters were taken “flying over forest in Maiduguri air dropping packages”.  It noted that, in one of the instances, the chopper crashed, and villagers who went to the crash site saw two caucasian men burning briefcases of dollar bills before fleeing.

This tweet is the first in a thread alleging how foreign countries – France and Chad – fuel the Boko Haram crisis, hence, frustrating the efforts of the Nigerian military.

The tweet made on May 11, 2021 read “2015. Residents in several villages talk about unmarked helicopters flying over forests in Maiduguri air dropping packages. Especially at night. In one incident they watched the helicopter crashes. Villagers ran to the scene to rescue the occupants and were stunned to see two Caucasian men burning briefcases of hundred dollar bills before running away [from] the crash site.”

Within 24 hours, the post generated almost 4, 000 shares and over 4,500 reactions. The account, Defense Nigeria news [@DefenseNigeria], which states in the bio that it is not related to Nigeria’s military has over 41, 000 followers.

The photos of the helicopters were taken while they were flying over forest in Maiduguri.

Findings by the FactCheckHub show that the claim is inaccurate and therefore, misleading.

Maiduguri is the capital of Borno state and it forest, Sambisa is habited by Islamist militant group, Boko Haram which made global headlines in 2014 when they abducted  more than 270 school girls.

For over a decade, Nigeria has been battling insurgency at it North-East region. The prolonged fight has led to numerous conspiracy theories and counter theories ranging from it was sponsored to make the country ungovernable, foreign forces  involvement for financial gains or religious agenda and even political power play by  western countries.

The tweet by @DefenseNigeria came at a time when visuals of some foreigners said to be mercenaries, allegedly killed by insurgents were in circulation.

The FactCheckHub  using a Reverse Image Search Technology traced the first image to Mount Airy, a neighbourhood in Philadelphia, in the U.S where residents panicked over a low flying unmarked helicopter.

This incident happened in 2017.

The authorities of the Philadelphia Electric Company (PECO) confirmed that the helicopter was monitoring transmission lines against overgrown vegetation, PhillyVoice reported

“Yes, we do helicopter patrols of transmission lines and related equipment on a regular basis,” Greg Smore, PECO Spokesperson stated. “It gives us different vantage points so we can document any conditions of concern and relay it back to the repair crews…”

It is clear that the photograph did not originate from Nigeria.

The second photograph did not also emanate from Nigeria but Medina County, in Ohio, U.S.

In June of 2016, residents told press that a  helicopter was flying as low as 40 yards and they heard gunshots which made them panic.

At 43 seconds of the 3 minutes 18 seconds video news report by News 4 San Antonio, shows a very clear similarity with the second image shared in the tweet under verification.

The image was either a screengrab taken from the video or a still taken around the same time the video of the flying helicopter was recorded. Therefore, it is not in Nigeria as claimed in the tweet.

Further search showed the third picture was taken in May 2019 by Schuyler Kropf for The Post and Courier Newspaper, a US-based newspaper founded in 1803.

“An FBI helicopter above the Charleston area on Wednesday, May 22, 2019,” the photo caption read.

The photograph was embedded in an article with the headline FBI helicopters spotted above Mount Pleasant area. It’s not what you think. It was authored by Michael Majchrowicz.

The report was to clarify a misconception over the alleged hovering of helicopters in search of persons believed to be on the wanted list of the Federal Bureau of Investigation (FBI).

In conclusion, the Twitter user @DefenseNigeria  linking these photographs to  helicopters “flying over forests in Maiduguri air dropping packages” is inaccurate and a misrepresentation because the photographs were all from different incidents that happened in the US in 2016, 2017 and 2019.

The three photos depict events that happened in the USA in 2016, 2017 and 2019. They do not show  helicopters “flying over forests in Maiduguri air dropping packages”. Therefore, it is MISLEADING.