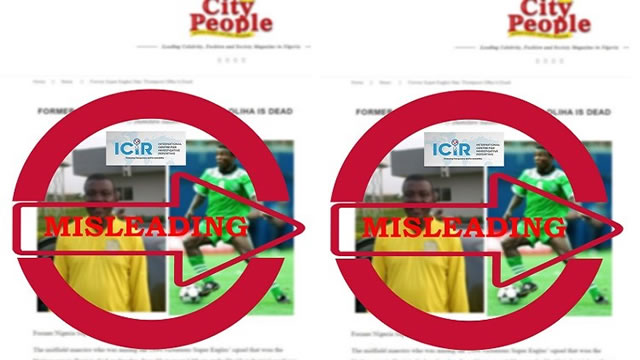 The report was shared via the social media handle of the entertainment news organisation which has over 12, 400 followers on Twitter.  The report has also been circulated  in several WhatsApp groups.

Oliha was part of the Super Eagles team that took part in the United States 1994 World Cup football tournament.

The news published on 5th July, 2020 was authored by Damilare Salami.

Based on Salami’s profile at the footer of the article, he is the Brand and Products Editor at the City People Magazine. The article was written like a fresh report without an indication to show that it is several years old.

The author did not state that the deceased died in 2013 even though he reported the date, time and location of Oliha’s death.

Moreover, several articles which reported the late Oliha’s death affirmed that the ex-footballer died in June, 2013.

The ICIR reached out to Yusuf Abdulraheem, the Chief Medical Director of Yusjib Industrial Medicare Care, the same medical doctor the author quoted in the news report.

Abdulraheem clarified that the deceased died seven years ago.

According to Abdulraheem, he was at the hospital located along Ajase – Ipo road, Ilorin, Kwara State at about 4:06 am when the incident happened.

He said Oliha was rushed to the emergency unit of the hospital but was already lifeless.

“He was brought in dead,” Abdulraheem said. “Immediately I saw him, he was already cold and turned blue. There was no pulse.  Clinically he was dead.”

The Edo State Chairman of the Sports Writers Association of Nigeria (SWAN), Ahmed Agbona said he attended the burial of Oliha.

Oliha was from Edo State.

Agbona stated that there might be another Thompson Oliha as the Oliha’s family is popular in Edo State.

He however stressed that, the Oliha who was the teammate of Daniel Amokachi in the 1994 National Team died in 2013.

“I am from Edo State. I was part of those that buried him,” Agbona noted.

Meanwhile, other independent findings by The ICIR revealed that the picture used for the story was first published in 2013.

Based on all evidence available, the claim is MISLEADING.

Was Access Bank in Onne, Rivers State shut down due to COVID-19 infection?

Was Ize-Iyamu arraigned in Court for allegedly ‘looting’ N700m?