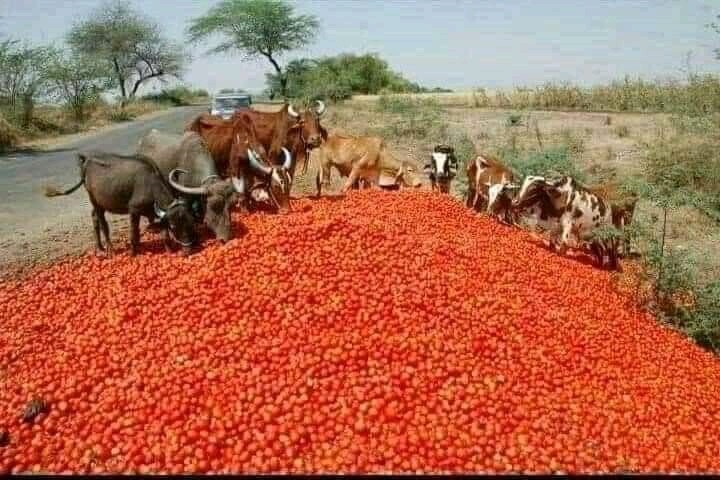 ON March 4, 2021, an image posted by a blog showed cattle eating from a tomato heap by the roadside.

The blog noted that these tomatoes are loss incurred by farmers in the northern part of Nigeria.

[SIC] Here are photo of spoil Tomatoes throw away along the road after been intercepted for days without able to move to the south.

This image with similar implied and explicit captions was also posted by different persons; here and here.

That the image shows cattle eating tomatoes from farmers in the North who couldn’t supply to the southern part of Nigeria.

CONTEXT: Following an ethnic crisis between the Hausa and Yoruba in Shasha, Oyo State, which also resulted in the loss of lives and properties, some northern traders under the Amalgamated Union of Food Stuff and Cattle Dealers of Nigeria resolved to suspend the transportation of farm produce to southern parts of Nigeria.

Trailers loaded with cattle, onions, tomatoes, and other farm produce were stopped from entering Jebba, a border town between Kwara and Niger States of the country.

In a report, the Union said it embarked on the action as a form of protest against the alleged killings of its members residing in other parts of Nigeria.

“There is a task force that we set up to enforce the directive by the union that there would be no transportation of cattle and foodstuffs to the South with effect from Thursday. So, the union set up the task force to prevent sabotage,” Kabiru Salisu, the Union’s financial secretary stated.”

The incident had since generated reactions on the internet with people in support and against the move.

Does the image depicts cattle eating tomatoes owned by farmers from northern Nigeria?

A search conducted by The FactCheckHub using the reverse image search traced the image to  2013  where it was published by a Hindi newspaper.

It was traced to Barwani District, in Madhya Pradesh, India.

According to the report, “a campaign to make agriculture a profitable business is going on in Madhya Pradesh, but tomato farming is proving to be the biggest loss-making business to the farmers of Barwani. The situation is that farmers are not even getting the cost price of tomatoes. They eventually threw tomatoes on the streets.”

After then, the image has appeared on the internet in July 2017.

Therefore, this cannot be an image of an incident that is stated to have happened in Nigeria in the year 2021.

The claim that the image shows cattle eating tomatoes from farmers in the North who couldn’t supply to the southern part of Nigeria is FALSE. The image has been online since 2013 and it is from India.

Is Nigeria the largest producer of cassava in the world?