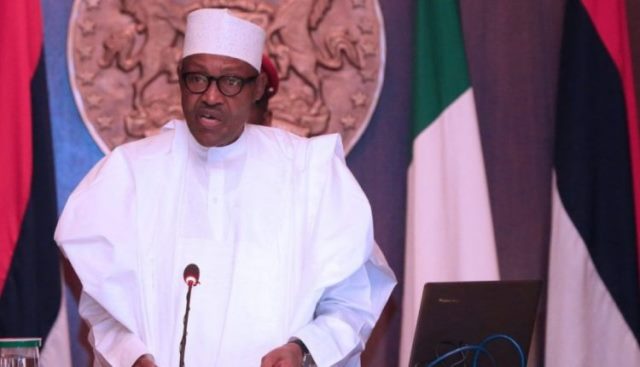 Buhari made this disclosure while hosting the All Progressives Congress (APC) Governors during Eid-el-Kabir celebration in Daura, Katsina State, stressing that the foreign reserve of the country would be spent solely to diversify the economy.

But this claim has been a subject of debate among  Nigerians at home and abroad.

The Federal Government in 2016 unveiled the Agriculture Promotion Policy (APP) otherwise known as the Green Alternative. It was an integration of the past government’s agricultural policy – Agricultural Transformation Agenda (ATA). The policy was targeted to achieve ‘food security’, import substitution, job creation and diversify the economy.

It specifically prioritised crop productions as a way of achieving the food security plan, and boost export for increased foreign revenue.

“Focusing policy on achieving improved domestic food security and boosting export earnings requires a measure of prioritisation. Therefore, for domestic crops, the initial focus in 2016 – 2018 will be expanding the production of rice, wheat, maize, soya beans and tomatoes,” the policy states without a specific benchmark.

Going by the policy document, Nigeria is expected to have significantly improved food production beyond local demand, particularly farm commodities such as rice, wheat, maize, soya beans and tomatoes by end of the president’s first tenure in office.

Other crops targeted for increased local production and exports within the same period include cocoa, cassava, oil palm, sesame and gum Arabic.

But what is food security?

The term food security has an implied or explicit meaning, but there are major variables such as access to food, food availability and affordability in terms of prices. The continuous change in the operational definition of the concept has led to more inclusion of other parameters such as food safety and nutritional values for a balanced diet for a healthy living.

As defined by the United Nations’ Committee on World Food Security, and adopted by the International Food Policy and Research Institute (IFPRI), food security “means that all people, at all times, have physical, social, and economic access to sufficient, safe and nutritious food that meets their food preferences and dietary needs for an active healthy life”.

The World Food Programme (WFP) also notes that people are considered, “food secured when there are availability and adequate access at all times to sufficient, safe, nutritious food to maintain a healthy and better living”.

Also, 2019 Global State of Food Security and Nutrition report analysed food security from two indicators – Prevalence of Undernourishment (Hunger) which estimates the number of people that lacks access to dietary energy, secondly, those who lack access to nutritious and sufficient food due to lack of money or other resources. Does this apply to food reality in Nigeria?

In relation to the food situation in Nigeria, this means beyond food production, do we have enough nutritious food to maintain a healthy living of over 190 million Nigerians. Are these foods safe? Are they accessible and sufficient at all time?

The Global Food Security Index (GFSI), while measuring Nigeria’s food security ‘fete’ ranks the country 96 from the 113 index countries. Nigeria was surpassed by most African countries such as Angola, Rwanda, Togo, Kenya, Cameroun and Benin Republic in the food security index. Nations that are currently battling with crises, such as Myanmar where killings as a result of religious clashes, and forced migration still got higher ranks than Nigeria.

Nigeria which ranks 96 leads Sudan by only three steps, ranking 99 from the 113 nations surveyed.

The ICIR takes a further look into Nigeria’s volume of local food production as detailed by the FAO in alignment with the APP, it showed an unstable increase in production except for rice and maize but does not translate to food security. The agricultural policy has also not been fully realised.

In 2015, 10.5 million MT of maize was produced. In 2016, it increased to 11.5 million MT while 10.4 million metric tons of the commodity was realised in 2017. No available data on 2018 production. However, while the APP puts the demand figure at 7.5 million MT, the Maize Farmers Association of Nigeria placed the current production figure at 20 million MT.

As for tomato, about 4.22 million MT of the commodity, major perishable farm produce was produced in the country in 2015. Its production declined to 4.12 million MT in 2016 and in 2017, it further went down to 4.10 million MT while local demand stood at 2.2 million MT.

One of the globally accepted platforms to measure attainment of the UN Sustainable Development Goals (Goal 2), especially on extreme poverty is the World Poverty Clock. It says 94.17 million Nigerians are currently living in extreme poverty. According to the clock, as of January 2016, 78.04 million Nigerians were extremely poor. Meanwhile, the SDG goal two which connotes end hunger; achieve food security as well as nutrition should be achieved by 2030.

However, these imply that between 2016 and August 2019, 16.13 million Nigerians have been plunged into extreme poverty. But if the claim by the federal government is true that 5 million people were rescued from poverty in the first four years of Buhari’s administration, it means, there would still be over 11 million extremely poor Nigerians. The clock further predicted a likely increase in the percentage of people living in extreme poverty to 46 per cent by 2030.

Malnutrition still on the increase

In addition, the FAO in its report on the State of Food Security and Nutrition in the World (2018) largely linked access to a healthy diet and safe nutrition to food security. It maintains that food insecurity could cause child stunting, micronutrient deficiencies and obesity. As a result, the United Nations Children Fund (UNICEF) in the latest 2019 state of food security and nutrition report, however, says an estimated 2 million children are suffering from severe acute malnutrition in Nigeria.

“The alarming signs of increasing food insecurity and high levels of different forms of malnutrition are a clear warning that there is considerable work to be done to make sure we leave no one behind on the road towards achieving the SDG goals on food security and improved nutrition,” the State of Food Security and Nutrition Report 2018 and 2019 states, affirming the link between food security and malnutrition.

2018 version of the same report, released this year shows the prevalence of stunted children rose to 43.6 per cent from 13.9 per cent in 2017. The number of severely malnourished people also rose to 25.6 million people.

In conclusion, the FAO further identified food security as a multi-dimensional phenomenon rather than a single indicator to measuring attainment of food security as disclosed by the president.

Based on these pieces of verifiable pieces of evidence, the president’s claim of achieving food security cannot be substantiated, thus MISLEADING and at worse FALSE. This is because food security goes beyond food production. Rather it also comprises access, affordability, nutrition and safety. Aside from the available evidence, Nigeria has currently ranked among the nations with second-highest burden on stunted children globally with 32 per cent national prevalent rate.