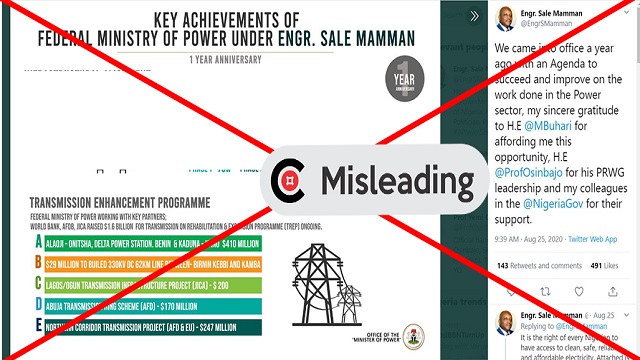 A screenshot showing the part of the misleading tweet made by Engr. Mamman Sale, Minister of Power, Nigeria.
Reading Time: 4 minutes

Nigeria’s Minister of Power, Engr. Sale Mamman, had on August 25, 2020, made a tweet thread to mark his one year anniversary in office. The tweets were accompanied with infographs detailing his achievements since his appointment by President Muhammadu Buhari in August 2019.

One of the infographs with a  screaming headline “Key achievements of Federal Ministry of Power under Engr. Sale Mamman”  and  a rider headline “1 year anniversary” presented the achievements in two categories – Infrastructural Alignment reflecting the Siemens Deal and the Transmission Enhancement Programme under which it states that the ministry working with key partners raised $1.6 billion for the ongoing (electricity) Transmission, Rehabilitation and Expansion Programme (TREP).

It went on to delineate five projects under the TREP. This, alongside other achievements, was attributed as part of  Mamman’s  accomplishment within his first year in office.

That the Ministry of Power under Engr. Sale Mamman raised $1.6 billion for the ongoing Transmission, Rehabilitation and Expansion Programme (TREP) bewteen August 2019 to August 2020.

TREP is a strategy which is expected to rehabilitate and expand the nation’s (electricity) transmission infrastructure in order to stabilize the grid for optimum performance, in line with international best practices, through massive investment. TREP is also expected to expand the capacity of the Transmission Grid to 20,000MW by 2021, says a Transmission Company of Nigeria (TCN) document on the project.

In 2018, the Managing Director of TCN,  Usman Mohammed, when he presented the company’s 2018 scorecard to State House correspondents in Abuja, said “We have established transmission, rehabilitation and expansion programme. The main objective of this is to rehabilitate, stabilise and expand the delivery capacity of TCN to at least 20,000 megawatts by 2021 and we are on track”.

This was prior to the commencement of Mamman’s tenure as the Minister of Power.  He was appointed by President Buhari in August, 2019. He took over the Ministry of Power from Babatunde Fashola, who was the then Minister overseeing the Federal Ministry of Power, Works and Housing (FMPWH) during the first tenure of the democratically-elected Buhari presidency.

In addition, the TCN published a scorecard titled “Milestones from February 2017 to September 2018,”    which shows detail of the funding support two years before Mamman became the minister.

The $1.6 billion donor support was from the World Bank, African Development Bank (AfDB), and Japan International Cooperation Agency (JICA) while the French Development Agency also supported with a $170 million commitment for the Abuja Transmission project.

The document which stated that the TCN Management in February 2017 under UG Mohammed, established the  (TREP) went on to delineate the status of implementation of donor-funded projects as at September 2018.

It states that the  “Abuja Transmission Ring Scheme is financed by the French Development Agency ($170 million). The procurement process has reached the final stage; two contracts for the lines have been signed and the remaining lots for substation projects have been evaluated and submitted to AFD …”

The “Lagos/Ogun Transmission Project financed by Japanese International Corporation Agency JICA ($200 million). The project which was inherited from past management of TCN has been completely scoped, designed, with their EIA, RAP and ESMP completed. However, the compensation amount was very high, initially put at N8billion and later reduced to about N5billion. The Governor of Ogun State has been asked to assist with the compensation for the RoW for the Ogun/Lagos Transmission Project”. On this Mamman infograph had “$200” without the “million” as the amount, this might be a typographical error.

The “Nigeria Electricity Transmission Access Project (NETAP) financed by the World Bank ($486 Million). The project started with advanced procurement in 2017 and was approved by the board of the World Bank in February 2018. The procurement of the project has reached advanced stage but it is yet to become effective as it is still awaiting approval and Legal Opinion of the Attorney General and Minister of Justice”

The “Nigeria Transmission Expansion Project (NTEP) will be financed by the African Development Bank ($410 million).”

The “Northern Corridor Transmission Project to be financed by French Development Agency and EU ($245 million and €25 million). The appraisal of this project was completed on September 28, 2018 and is expected to be approved by the Board of AFD and EU in November 2018. ”

From the TCN documents, it can be deduced that even though plans were on ground, not all the fundings were available as $210 million was approved by the AfDB for NTEP in November, 2019.

This invariably means that the minister cannot wholly claim this as his achievement within the one year period under review.

Although $1.6billion (dollars) is the fund for the ongoing TREP project, it was not totally raised by the Mamman-led ministry between August 2019 and August 2020, which makes the minister’s claim misleading.

The claim that the Ministry of Power under Engr. Sale Mamman raised $1.6 billion for the ongoing Transmission, Rehabilitation and Expansion Programme (TREP)  between August 2019 to August 2020 is MISLEADING.