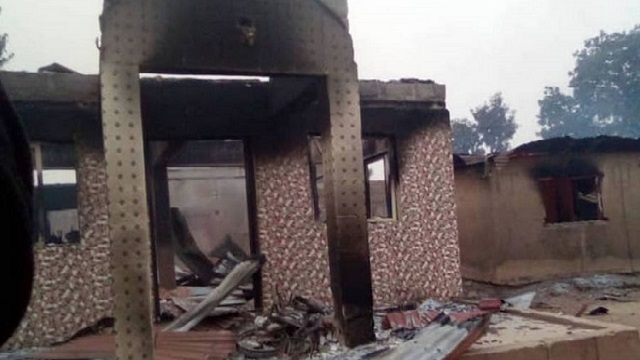 One of the viral images.
Reading Time: 2 minutes

ON January 23, 2021 several images depicting the charred remains of  burnt buildings were circulated online. The buildings were said to belong to the Seriki Fulani of Oyo state, Saliu Abdulkadir.

A Twitter user with the handle @MFaarees_ also shared the photos while making a similar claim.

In Southwest Nigeria, there have been multiple cases of  killings and kidnappings for ransom on highways and farmlands. A number of the victims who regained their freedom had reported that their abductors were herders of the Fulani descent.

The Governor of Ondo State, Rotimi Akeredolu, had ordered herders to vacate the forest reserve in the state. This was swiftly countered by the Nigerian Presidency.

Amidst this, Sunday Adeyemo, a promoter of Oduduwa nation had raised alarm over continuous attacks on the Yoruba communities by persons alleged to be herders in the South-west.

Sunday, who is also known as Sunday Igboho, issued a seven-day ultimatum for the herders – who are mainly Fulani –  domiciled in Igangan community, Ibarapa North local government area (LGA) to vacate the state.

After his visit to Igangan community, the Seriki Fulani’s house was set ablaze.

This was reported by Sahara Reporters which shared the pictures in question.

In addition, Daily Trust newspaper on Sunday, January 24, also published similar photographs in a report about the crisis in the community.

By Monday, January 25, 2021, Channels Television in a report on the crisis showed footage of Ngozi Onadeko, the new Commissioner of Police, Oyo State Command, during her fact-finding visit to the town. Similar photos were shown in the report.

Three days after the incident, on January 26, Sunday Igboho’s house was set ablaze by unidentified hoodlums, says the Police.

The claim that the images depict  burnt house of Seriki Fulani of Oyo State, is TRUE.