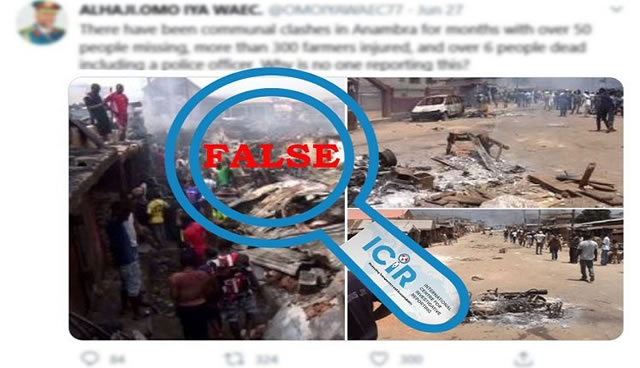 ON June 27, a Twitter user identified as @OMOIYAWAEC posted three pictures on the social media to depict incident of communal attacks in Anambra State.

The incident was earlier reported in May and published by different media organisations including Punch Newspaper.

“There have been communal clashes in Anambra for months with over 50 people missing, more than 300 farmers injured, and over 6 people dead including a police officer. Why is no one reporting this?” @OMOIYAWAEC had tweeted.

The ICIR subjected the photographs to verification and findings revealed that two of the pictures were as old as 2017, while the third was first published in 2018.

The first picture which shows burnt motorcycle, for instance, has been published 11 times on the Internet and was first shared on March 18, 2017 by news2.onlinenigeria.com.

Moreover, long before the claim was made, the very picture was also published in Vanguard Newspapers online and the Nairaland forum on February 2018.

In fact, Vanguard Newspaper used one of the photographs to illustrate different stories.

The second picture with a burnt vehicle was also published on the internet, first on April 2, 2017.

Since then, it has been re-used on other news publications on the internet, some of which include Vanguard (November 2018) and Tell Magazine (May 2020), among others.

The third picture was that of a fire incident that occurred at Mgbuka Obosi spare parts market in Idemili North Local Government of Anambra State. It was reported in January, 2020.

All the three pictures do not relate to the event to which they were attributed.

The images are misrepresentation of the event they were used to depict, and are therefore MISLEADING.

Claim that 39 Arabians, 16 Russians and 20 Chinese were listed in the FBI most wanted list is FALSE