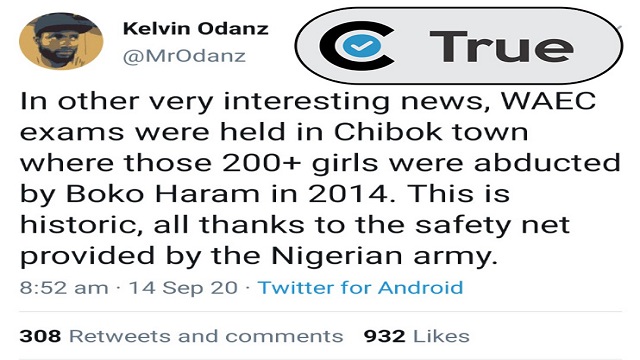 He applauded the fete commending the Nigerian Army for its interventions in the area.

“…WAEC exams were held in Chibok town where those 200+ girls were abducted by Boko Haram in 2014. This is historic, all thanks to the safety net provided by the Nigerian army,” he tweeted to his 63,000 followers.

Chibok town became prominent following the abduction of secondary school girls by the Boko Haram insurgents in 2014.  276 girls were kidnapped from their dormitory in the Government Secondary School located in North-East Nigeria.

While some of the girls managed to escape, 100 were freed in an exchange deal during a negotiation arranged by the International Committee of the Red Cross (ICRC).

The incident led to disruption of educational activities  in the area. But six years after the incident, findings by the FactCheckHub revealed the West African examination body resolved to return to the state to resume the secondary school examination.

“Yes, 238 candidates wrote the examination. There was no problem; everything went smoothly,” Ojijeogu said.

Media organisations had earlier reported the examination. Prior to the 2020 WAEC examination, reports say students would often travel to Jos, Maiduguri and other major cities in Nigeria’s northern states to write the examination.

The claim that the West African Examination Council (WAEC) held its senior school certificate examination in Chibok town is TRUE.