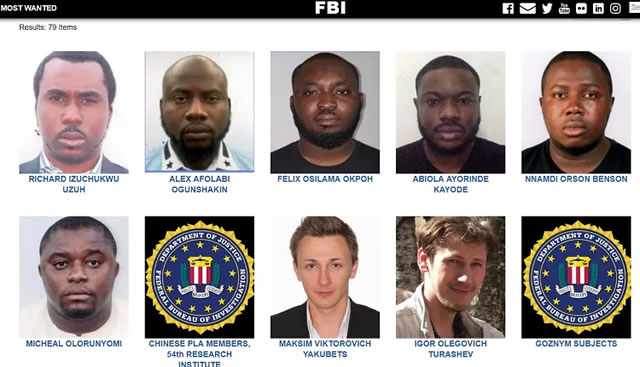 SINCE the United States Federal Bureau of Investigation (FBI) announced through its verified Twitter handle: @FBI, on June 27, soliciting  help to locate six Nigerians accused of an online scam worth over $6 million, the news has gone viral on the Internet and elicited diverse reactions from other Nigerians and the local media.

“Help the FBI find ​six Nigerian nationals wanted for their involvement in ​business​ email ​compromise (BEC) schemes resulting in over $6 ​million in losses,” the FBI tweeted.

But, among several other reactions, a Twitter user @Mayoveli claimed that 39 Arabians, 16 Russians, 20 Chinese and Southeast Asians were part of those accused.

He alleged that the FBI spotlighted the suspected Nigerians among other suspects of different nationalities, because of their race.

These claims have, however, generated more reactions than the original tweet of the FBI.

Tosin Olugbenga @TosinOlugbenga, another Twitter user also quoted the same figure stressing that the Bureau resolved to use the six Nigerians as the ‘poster boys’ for the crime.

“I checked this list, there are 39 men of Arab origin, 16 Russians, 20 Chinese/Southeast Asian guys, and just 6 Nigerians.

“But guess who FBI chose as the poster boys for this crime? The 6 Nigerians.

The contention was that despite having scores of other nationals indicted for similar crimes in the most wanted list, the FBI allegedly used as a poster and made reference to the six Nigerians identified as Richard Izuchukwu Uzuh, Alex Afolabi Ogunshakin, Felix Osilama Okpoh, Abiola Ayorinde Kayode, Nnamdi Orson Benson and Michael Olorunyomi.

Meanwhile, other nationals in the FBI list were Chinese, Russians, Iranians and some citizens of Arabian nations but to mention a few.

The claim has again stoked the fire of racism discourse in Twittersphere.

The ICIR visited the FBI website and downloaded the controversial data. The citizenship or country of birth of each suspect as detailed on the website was verified to establish their nationals.

A study of the data, however, revealed that contrary to the above claims, the suspects were nationals of 12 different countries, and none was of Arab origin.

In the FBI most wanted list, there were 15 Chinese suspects, 27 Russians, one North-Korean, one Vietnamese, one Indian, one Ukrainian and one Swedish.

Others are six Nigerians, two Pakistanis, 29 Iranians, one Romanian, one Latvian

Moreover, countries such as Latvia, Romania, Ukraine are different sovereign countries from Russia contrary to the claim.

Again, some foreign citizens identified in the FBI list and categorised as Arabians were not. Pakistan for instance, does not identify itself as an Arabian or Middle-East nation but South-Asian.

The same applies to Lativa, Romanian and Iran.

The nations are excluded from the 22 Arab nations, according to the American-Arab Anti-Discrimination Committee.

For the second claim that the FBI deliberately used the six Nigerians as ‘poster boys’ rather than picking from other accused nationals, who mostly populated the Bureau’s database, independent findings by The ICIR revealed that the FBI cybercrime most wanted list is always updated on a periodic basis.

For instance, as of May 13, 2020 names and identities of the six Nigerians were missing from the most wanted list.

Those topping the list as of the date above were the Chinese PLA Members, Maksim Viktorovich Yakubets, Igor Olegovich Turashev, the Gozynym Subjects and Fujie Wang.

Moreover, on April 29, 2019 the name of Maksim Viktorovich Yakubets was published on the most wanted list on the same date Igor Olegovich Turashev, another Russian made the list.

Similarly, as of April 2, 2019, the above names were also missing on the FBI most wanted list.

The names that topped the list as of this date were four Iranians Mojtaba Masoumpour, Behzad Mesri, Hossein Parvar, Mohamad Paryar and IRGC-Affiliated actors. Thus, it means that the FBI’s most wanted list is usually updated at interval, as those of the six Nigerians currently top the list because they were the most recent names to be added to the Bureau’s website.

Based on available findings, the claim that 39 of the suspects were of Arab origin is FALSE.

Also, the claim that the accused Nigerians were made the “poster boys” based on their race is also MISLEADING, and thus FALSE.