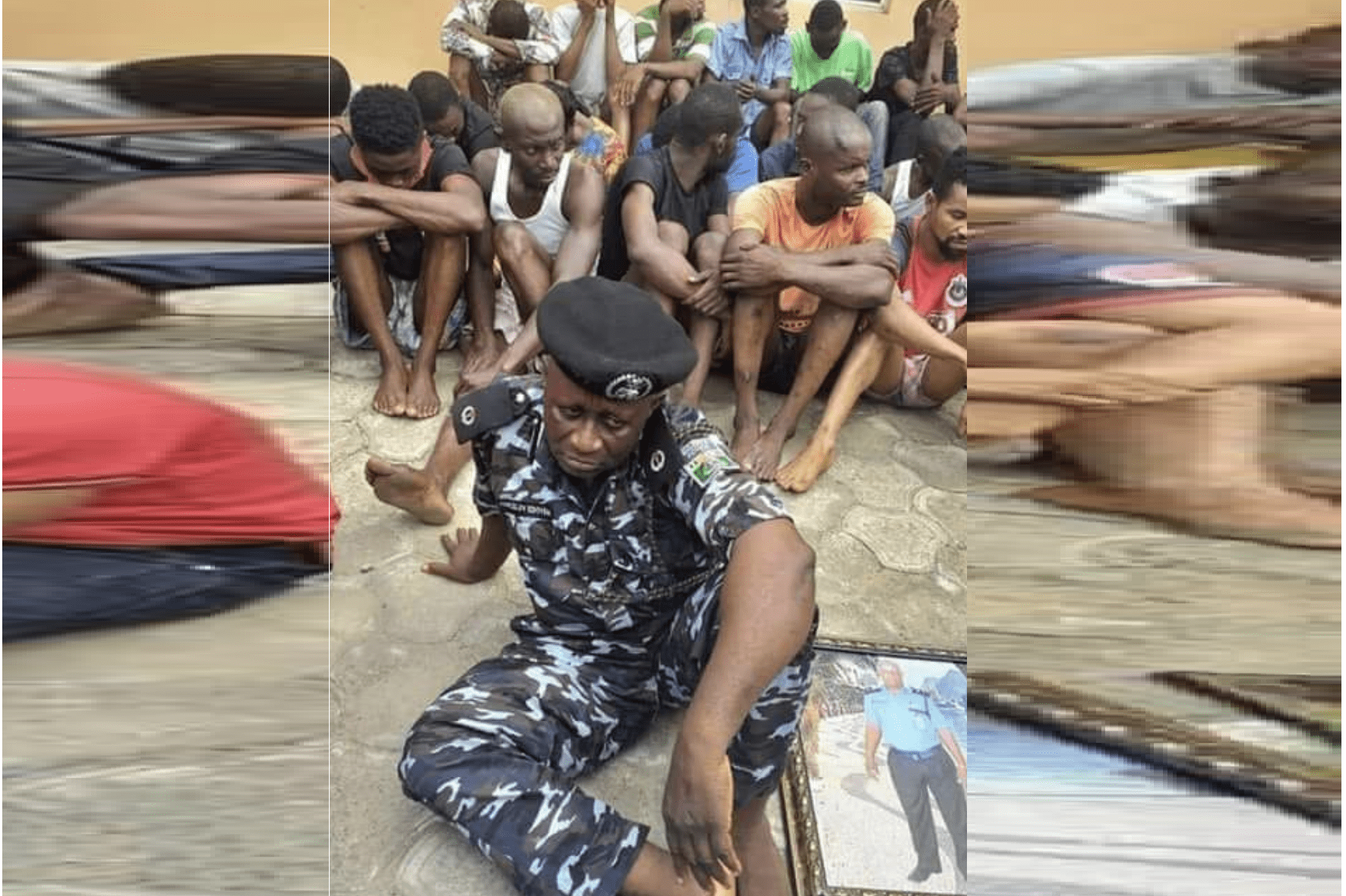 This image has been in circulation since 2019 with varying claims.
Reading Time: 3 minutes

AN image of a man dressed in the Nigerian camouflaged Police uniform sitting in front of other men in the Police-parading-suspects style has been circulated online with the claim, he is the Deputy Commissioner of Police (DCP) in Kaduna state who was arrested for collaborating with bandits and kidnappers.

The caption of the the photo which was sent to The FactCheckHub  via WhatsApp on Wednesday, September 29, 2021 for verification  read “Kaduna State Deputy Commissioner of Police Command, went to give firearms to bandits and kidnappers, unfortunately, he was arrested”.

Kaduna State Deputy Commissioner of Police was arrested for giving firearms to kidnappers and bandits.

The image resurfaced at a point where Nigeria is  enmeshed in a wave of insecurity such as banditry and kidnapping. Kaduna is one of the states plagued by the insecurity.

A reverse search of the image  showed that it has been shared across different social media with some of them dating back several years.

Furthermore, this image in some instances has been manipulated and carry varying  captions.

An immediate inconsistency spotted is in the rank on the uniform worn by the man. The rank is that of an Assistant Commissioner of Police, (ACP), aside checking the ranking insignia of the Nigeria Police online, it was also independently confirmed to The FactCheckHub by two Police officers. This contradicts the the claim which states the man is a DCP.

Furthermore, the result from a Google Image Search  showed that there have been reports published since June 2019, stating that a man impersonating an ACP was arrested in Akwa Ibom state.  The picture in the report is the same image in circulation.

The man was identified as Kingsley Udoyen. The Police tagged him as fake Police, who according to the Akwa Ibom State Police Command, was 53 years old, resident in Akwa Ibom state.

In addition,  earlier in the year the Police had  issued a social media photo card to debunk a similar viral claim.

The rebuttal which was traced to the verified security agency Twitter handle @PoliceNg  was made  on March 15. The Police noted “He is not a cop”, he was arrested and paraded for impersonation.

In June 2019, they announced the prosecution of the accused impostor.

The Kaduna State Police Command, in April of 2021, also debunked the claim saying “The command wishes to categorically state that the image in circulation is not that of any police officer in the Kaduna Command or anywhere in Nigeria”.

“The image with camouflage uniform, wearing the rank of an Assistant Commissioner of Police, is one of Kingsley Udoyem, who was arrested and paraded by Akwa-Ibom Police Command on 2nd January 2019 for the offence of impersonating a police officer. Therefore, the image in circulation is not in any way connected to a Deputy Commissioner of Police in Kaduna as portrayed in the report,” the Police stated.

The Factcheckub had earlier debunked a similar claim shared with the picture where it stated a Police officer was arrested for kidnaping, this time around without adding the state.

The claim is FALSE, the Nigeria Police stated the man in the picture is an impersonator and the image has been in circulation since 2019.

Was groomsman refused entry in church for wearing earrings?