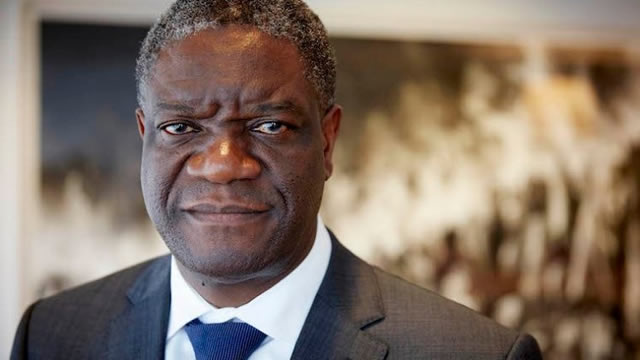 ON June 16, a viral post on social media by Kiffasblog claimed that Denis Mukwege, a medical doctor and Nobel Peace laureate from the Democratic Republic of Congo, resigned from the Congolese government’s Coronavirus Response (Taskforce) Team after he was reportedly asked to declare any illness from patients, brought to hospitals in his province as Coronavirus Disease (COVID-19).

The post, which went viral on Twitter, Facebook, and among WhatsApp users in Nigeria, Cameroon and Kenya, etc, was also shared by a Facebook page, Feedback Express Show, on June 17. As of Friday, June 19, it has been shared 370 times and garnered 395 reactions with 99 comments.

“I cannot in any case dirty my Nobel Peace Prize for money, we had been ordered to declare any illness to be Coronavirus and any death.

“In addition, the thing that displeased me is that, after more than 100 samples, none came out positive. I have a career to protect and I am Congolese by blood. Getting rich by lying is a sin before God, I quit,” the blogger stated quoting Mukwege.

A fact-check by The ICIR revealed that Mukwege had earlier issued a statement explaining his position on why he decided to resign. This was published on  June 10 on the website of Panzi Foundation RDC.

Mukwege, a renowned gynaecologist had assisted over 30 rape victims and targets of sexual violence with medical care at the Panzi Hospital in Bukavu, a gesture that earned him the global peace award in 2018.

In the statement, Mukwege attributed his decision to resign his position to slow the testing of suspected COVID-19 cases due to lack of laboratories.

The obstetrician-gynaecologist also blamed the Congolese government and identified challenges of poor coordination and organisation among the team members.

These concerns were reported by credible international news media such as Washington Post, rfi, France 24 but to mention a few.

“Two major difficulties prevented us from effectively applying our strategy:

“On one hand, the impossibility of having in our province of RT‐PCR allowing to quickly confirm the diagnosis of COVID +. The time required, of more than two weeks, to receive the results of the samples sent to the National Biomedical Research Institute in Kinshasa, constituted a major handicap for our strategy based on “testing, identifying, isolating and treating,” he said in the statement.

He added: “On the other hand, a loosening of prevention measures by our population, denial of realities, the impossibility of enforcing barrier measures, the porosity of our borders with the massive return of thousands of compatriots from neighbouring countries without having been quarantined, decreased the effectiveness of our strategy.”

But a blog – Kiffasblog.com, contrary to Mukwege’s position reported wrongly why he resigned. Though the news report has since been deleted from the website, it has gone viral and shared many times on social media.

“Please note that all statements or press releases posted appearing to be in my name, that do not appear on our social networks or official sites (Panzi Foundation DRC, Panzi Foundation USA, Mukwege Foundation, and Panzi Hospital) are unauthorized and/or fraudulent statements,” he stated in the Facebook post.

Meanwhile, as of Thursday, June 18, 116 COVID-19 related deaths have been recorded in DR Congo with 5,282 confirmed cases, according to the World Health Organisation (WHO).

Based on The ICIR findings, the report on Dr. Mukwege by Kiffasblog is FALSE.

Has Banditry, Kidnapping reduced in Nigeria as claimed by Lai Mohammed?