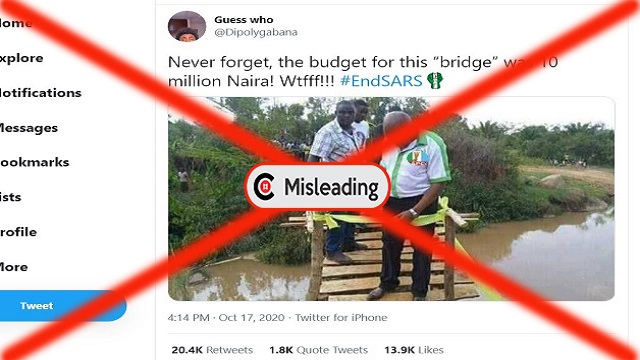 “Never forget, the budget for this “bridge” was 10 million Naira,” says a Twitter post by Guess Who published on Saturday October 17, 2020.

The post has a picture of  man cutting a ribbon to commission a small rickety wooden bridge. The man’s white shirt has the logo of All Progressives Congress (APC).

The APC is the ruling political party in Nigeria.

The post suggests that the government (APC) was responsible for an  overpriced bridge by adding the hashtag #EndSARS. It seeks to amplify the demands of  Nigerian youths who have continued to demonstrate against Police brutality and bad governance in the country using #EndSARS.

That the image shows an APC leader commissioning a wooden bridge which was supposed to have cost  10 million Naira.

Checks by the FactCheckHub shows that the picture was manipulated and therefore MISLEADING.

Using the Reverse Image Search and Tin Eye tools, the picture was traced to publications in Zambia, Ghana, Kenya, Sierra Léon and other forums in Nigeria.

The Google reverse image showed the picture first appeared on the internet on Monday, February 6, 2017 on a Kenyan platform.

“Kenya’s social media is a gold mine of crazy. From misspellings, photoshop fails, memes and strange habits caught on camera, they are sprawling from all corners of this country,” the post read.

A few weeks after, the image was tweeted by a South African government official Tito Mboweni on February 26, 2017.

In addition, the Zambian Scribe used the same picture on January 21, 2019 to complement a story alleging that a member of parliament from an East African country commissioned the wooden bridge said to have cost 500, 000 dollars.

The picture which showed a man about to cut a ribbon does not have the APC logo on his shirt as portrayed on the viral picture.

It also appeared on a Nairaland, a Nigerian platform  on May 27, 2019; this time around, the APC logo which was not there initially was added.

The size and dimension of the logo relative to the size of the man is off, in that the logo is too big, plus it looks super-imposed.

Furthermore, the image was earlier fact-checked on January 2019 when The Nigeria Politics Today, a Facebook page shared it.

From the information presented above, the APC logo was super-imposed on the image thus it is MISLEADING.

Claim that Nigerian government is giving out free N50,000 lockdown funds to each citizen is FALSE