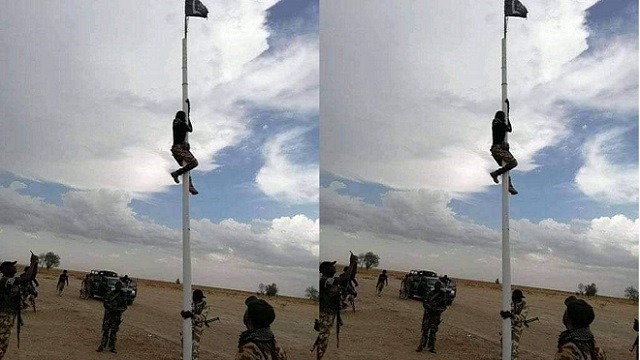 A photo of what appears to be Nigerian soldiers taking down a flag hoisted by Boko Haram insurgents was shared on social media as taken this year – 2021.

The photo tweeted by @zikallah was captioned:

The tweet which was shared over 1,500 times and liked 6,600 times alludes that the image depicts a recent event where the troops successfully laid ambushed and attacked insurgents at Marte, a town in North-Eastern region of Nigeria.

The photo with similar captions was also shared by other social media users.

@Edrees4P also tweeted the photo with the following captions:

Replacing Boko Haram flag with Nigerian flag, after country’s soldier succeeded the terrorist’s troops in the heart of Sambisa Forest.

Photo depicts Nigerian soldiers taking down insurgents’ flag after defeating them in January 2021.

The photo was not taken in 2021. It was also not showing the troops after successfully repelling an attack in Marte this year.

The photo is from 2020, but it however, depicts soldiers removing a hoisted insurgents flag after a successful operation.

Using the Google Reverse Image search, the FactCheckHub traced the photo to a post made in May 2020 on the official Facebook page of the Nigerian Army.

The post also had photos of rescued women,  an Armoured Personnel Vehicle, and a deceased Boko Haram Commander, among others.

The Army as of May 28, 2020, had released a press statement titled – Terror War: Remarkable Victory for Nigerian military as troops continue to dislodge terrorist camps in the North-East.

In the report, 20 terrorists were neutralised while 241 abductees were rescued. It reads in part:

“During the operation, contact was made with the terrorists which led to an exchange of fire which resulted in the extermination of five (5) terrorists and the capture of the following items: 2 x motorcycles, 2 x bicycles, 1 x amplifier, 1 x battery, 2 x sewing machines and 4 x BHTs’ flags,” the post reads.

“Additionally, the troops moved further to a recently identified Boko Haram terrorists’ infested settlement – Mudu village where 241 kidnapped victims – comprising of 105 women and 136 children were rescued from terrorists’ captivity. The village and other surrounding terrorists’ camps  were equally destroyed by the courageous troops.”

Heroes of Nigeria, a dedicated social media platform managed by a non-governmental organisation, shared the photo via its Facebook page on May 28, 2020.

This was also reported by media organisations last year.

The findings above show that the claim is MISLEADING.  The photo was not taken in 2021. It is also not showing the troops after an operation in Marte. It’s from 2020. However, it depicts the Nigerian soldiers taking down a Boko Haram flag.

How genuine are pictures of burnt houses in Igangan, Oyo State?